To see our video of the Dieppe Disaster click the link.

In the spring of 1942 the situation of the Allies was still uncertain, even though the American’s had joined the fight. The Germans were advancing deeper into the USSR and the British divisions in North Africa had to withdraw. Europe was still held hostage by Germany. 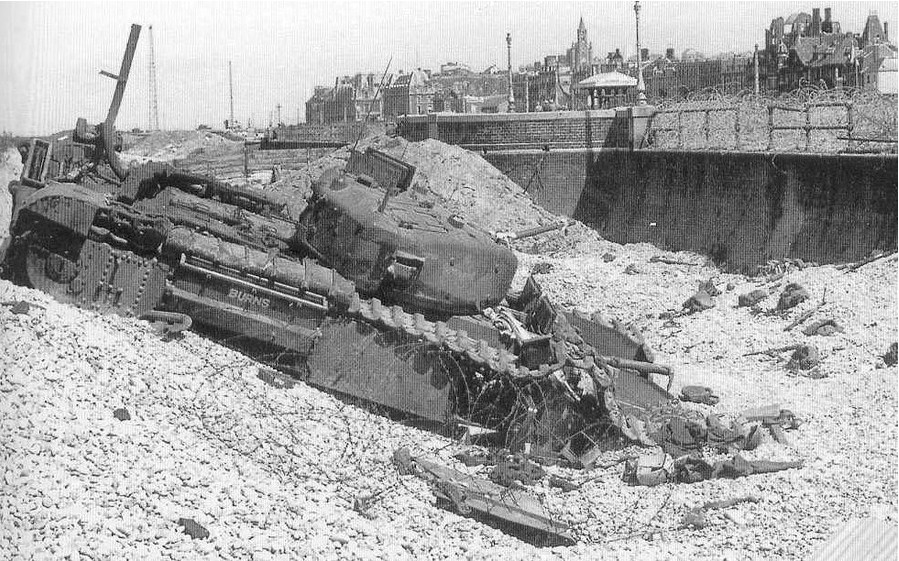 It was still not possible for the Allies to launch a large scale invasion of Europe to help the Russians. It was though decided to organize and operation in the port of Dieppe to arouse the fears of the Germans that an attack would be made in the western front.  This would oblige Germany to send troops to the west along the English Channel at the expensive of the eastern front.  The attack at Dieppe was also considered a useful test on the ways to capture a heavily defended port, necessary for the liberation of Europe.

Dieppe was mostly chosen for two main reasons, its size and its near distance to England, making constant air cover from the British coast possible. There were though disadvantages to Dieppe, such as its cliffs and pebbled beaches.

The Dieppe raid, known as “Operation Jubilee” took place August 19, 1942. The assault troops totaled 6100, of which 5000 were Canadian, the rest being British commandos, 15 free French soldiers, and 50 American rangers.

The attack was escorted by 8 Royal Navy Destroyers and covered by 74 Allied air squadrons.

There were 5 different landing points along the 16 km front. Four frontal attacks were to begin simultaneously at dawn and followed by one frontal attack on Dieppe itself.  The Canadians were to provide the main force for the frontal attack and for also the flanking attacks at Pourville and Puys to the east of Dieppe.  The British were responsible for the attacks at Varengeville and Berneval.

British Commando #4 landed according to plans in two groups, at Orange Beach 1 and Orange Beach 2. With the combine forces of the Royal Air Force and the Commando’s they were successful in their destruction of the munitions store and the Hess coastal arsenal.

In the landings on Yellow Beach 1 & 2 there were not as successful. The element of surprise was thwarted when the Allies meet a convoy of German patrollers.  This noise alerted the Germans and confused the landing vessels from Commando #3.  Only 5 out of the 23 barges dropped troops off at Yellow 1 (Petit-Berneval) and only 1 at Yellow 2 to its west. Almost all of the men from Yellow 1 were killed unable to reach their target.  However 20 men from Yellow 2 succeeded in advancing on the arsenal.  Though there numbers were too small to neutralize it they managed to keep the Germans too occupied with them for 1 ½ hours to fire on the ships bringing in the Allies to Dieppe.  This group managed to re-board their barge and return to England with no casualties. 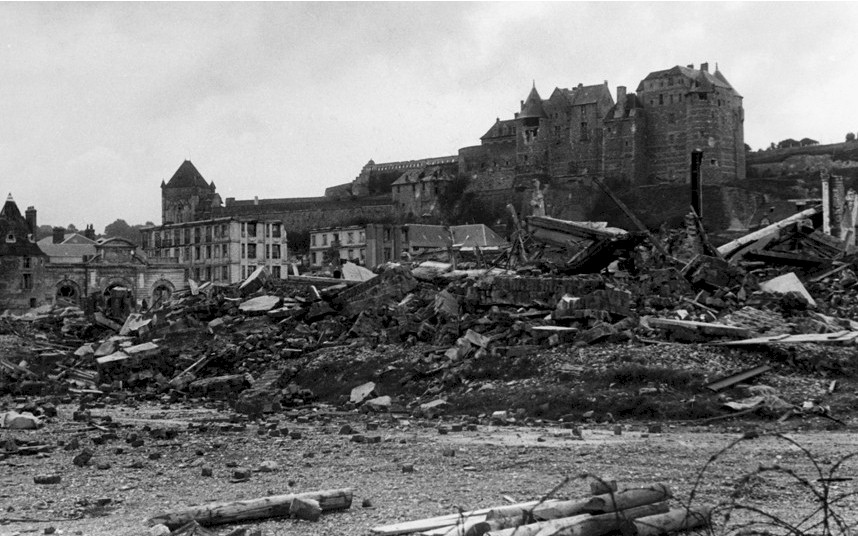 The Royal Regiment of Canada’s objective was to naturalize the arsenal on the cliffs east of Dieppe. Due to the sea wall and the German positions spread over the cliffs this was not easy.  The landing took place is 3 successive phases, each one facing formidable opposition. The Germans were fully alert and opened fired as soon as the first landings arrived.  The evacuation by the Allies from Blue Beach became extremely difficult as the onslaught from the Germans made organization of a retreat difficult.  Only 63 men out of 650 re-embarked for England.  The survivors surrendered at 8:30 a.m.  The Royal Regiment of Canada lost 94% of its men in less than 2 hours.

The men from the South Saskatchewan Regiment landed on the west beach but first had to cross the River Scie in order to go eastward for their mission which was to take out the German positions on the cliffs, along with the trenches and a radar station. This provided impossible due to the German resistance.  A small group was able to bring back information regarding the radar station and to neutralize its transmissions.

To the west, the Queen’s own Cameron Highlanders of Canada started late but were successful in assaulting the German positions west of Pourville before continuing on to their objective the Saint-Aubin-sue-Scie aerodrome. Four miles later they meet the Calgary Regiment tanks at Petite-Appeville crossroads.  The order to retreat though had already been issued.  During the final evacuation these two battalions lost a large number of men. A rear guard was formed to cover the re-embarkment however they were forced to surrender when they ran out of ammunition.

It started with cannon fire from the 8 destroyers, at which time the forces landed on the beach to murderous cross-fire from the Germans. The Airforce was to fire on the German defenses and the Churchill tanks of the Calgary Regiment was to land to cover the soldiers advance.  A delay though in navigation along with enemy fire prevents the tanks from giving support to the Infantry.  Some soldiers from the Essex Scottish Regiment from Red Beach and some Royal Hamilton Light Infantry from White beach, tried to find a way into the town.  Some manage to take the Casino and get into town but they were then either killed or taken prisoner.

General Roberts, who was ill informed about the situation at the beaches sent out the Montreal Fusiliers who were also killed or taken prisoner.

At 11:00 a.m. an evacuation order was given and began and by 1:00 p.m. all fighting had stopped. The Allied loses were considerable, 1200 dead, 907 of which were Canadians, 2340 prisoners taken and 119 planes lost along with one destroyer, The Berkeley, lost. 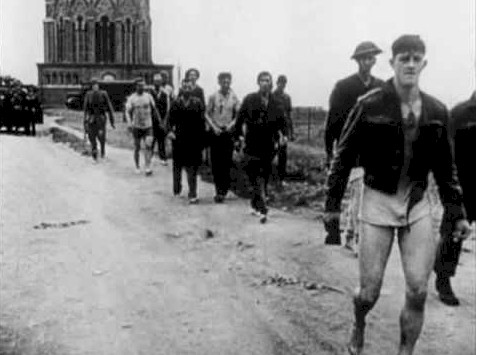 Many have argued about the results of the Dieppe raid. Was it a tragic blunder or a necessity for preparation for the D-Day landings?  Important lessons of course were learned but at a fearful price.

Two years after the tragic events at Dieppe, in which so many Canadians lost their lives; the honor of liberating Dieppe on September 1, 1944 went to the 2nd Canadian Division.  With the memory of the sacrifice of their fallen comrades on their minds, the Canadians paraded through the town of Dieppe to the ecstatic cheers of the crowds. 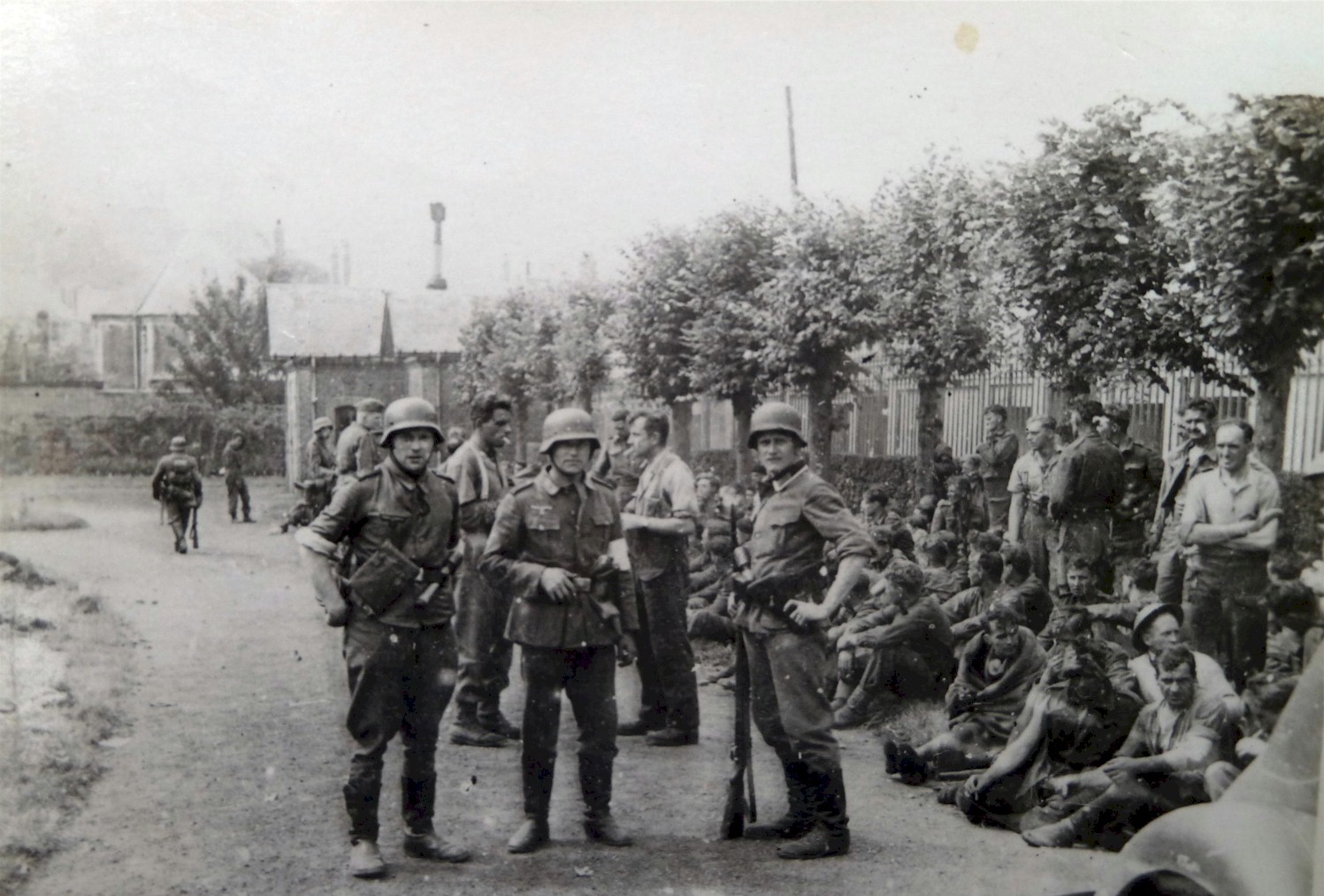 The Dieppe Canadian War Cemetery is a cemetery in France containing Canadian and British soldiers who were killed during the Dieppe Raid in 1942.

944 members of the Allied Armed Forces are interred at Dieppe, of which 707 are Canadian. Other dead from the raid are buried in Rouen, where the Germans took captured raiders, some of whom died of their wounds, or at the Brookwood Cemetery in Surrey, where wounded were taken by the Allies. Also in the cemetery are the remains of one woman, Mary Janet Climpson, a British Salvation Army Officer who had been killed in 1940. 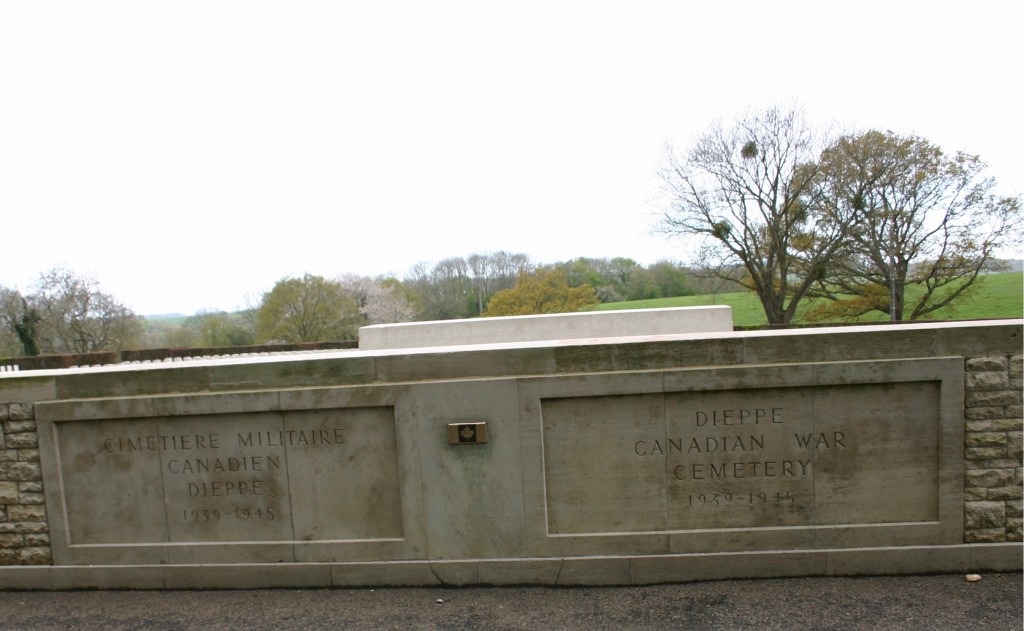 The cemetery is unique in that it was created by the occupying Germans, as the Allied raid was a disaster and many dead were forced to be left behind in enemy territory. The headstones have been placed back to back in long double rows, typical of German burials but unlike any other Commonwealth war cemetery. When Dieppe was retaken in 1944, the Allies elected not to disturb the graves, so this unusual arrangement still stands. Today, the cemetery is maintained by the Commonwealth War Graves Commission.

To view a list of all of the soldiers interred at the Dieppe Canadian War Cemetery
go to the blog.