Continuation of the War Journal of Corporal Harry Winther

December 8, 1943. This morning we were camped on a plateau overlooking the Sangro River Valley, this is quite a wide valley. We can see the enemy breakfast fires across the river. We are out of range from the machine gun fire but an occasional artillery shell lands in our area. First Canadian Division is in reserve. Montgomery’s eighth army is making an advance across the Sangro River which is very wide and deep. 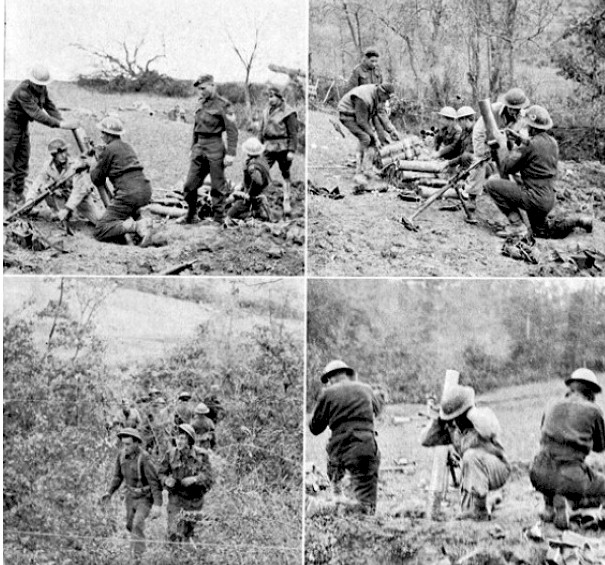 A contingent of British troops forces a crossing under cover of darkness in rubber boats with heavy losses. They manage to drive the enemy back from the river far enough to allow the engineers to put a Bailey bridge across to carry troops and tanks.

The next four days see very heavy fighting with constant artillery and air bombardment on both sides. The bridge was demolished once and had to be rebuilt. The British Free French, Polish, Seik and Gurkha Divisions drive the enemy back to the Moro River with very heavy casualties on both sides.

December 12th Sunday, First Canadian Division receives orders from General Montgomery that we will spearhead the advance across the Moro River for the attack on Ortona. As we advance through the battlefield I see war casualties from both sides piled up like cordwood along the roadside. We estimate at least a thousand killed and begin to wonder how good our chances will be to survive our attack on Ortona. As far as the eye can reach we see devastation; demolished buildings, wrecked and burned tanks and vehicles, dead and bloated farm animals.

We cross the Moro River and manage to reach a village called San Leonardo in our vehicles where we are stopped by very heavy shelling and machine guns firing down the main street. One of our drivers has just driven his truck up beside a house when a shell strikes the corner of the building. The explosion riddles the truck and kills the driver instantly. Cpl. Arnason, standing behind me, gets nicked in the leg. We take cover in the buildings which are of stone and work our way forward from house to house. When we reach the farthest forward house Capt. Wells, our company commander, informed me that he and I are going forward to make a reconnaissance for a position to move into after dark. We run and crawl down the ditch for about a half mile where we find a little ravine with a bit of water flowing in the bottom. We wait for the light to fade before setting up aiming posts for the mortars as we are well within range of the snipers. As soon as it is dark the rest of our platoon comes up with our guns and ammunition.

The West Nova Scotia Regiment had made a bayonet attack at dawn this morning which was quite successful, however, a little later the Hermann Goering Regiment counter-attacked, inflicting very heavy casualties. We helped to carry their wounded back to their Regimental Aid Post. When we brought their Platoon Commander out he still did not realize that he had lost both feet to a shoe mine. Just before dark Casey attempted to move his wireless up to the forward observation post, as he went by he got a sniper’s bullet right through the windshield where his head would be, fortunately he was leaning out the window.

December 13th just before dawn we are awakened by some W.N.S.R. troops running through our lines. Three tiger tanks have entered their area and are crushing them by turning as they cross their slit trenches. It is pretty hopeless for infantry to face tanks, nevertheless Lt. Rankin orders us to fix bayonets and hold the line. Sgt. Zulkowski arms our P.I.A.T. (projectile infantry anti-tank), our only anti-tank weapon, and moves a bit forward. It is possible to penetrate the armour of a tank if you can strike where the turret revolves against the body of the tank which would be a pretty lucky shot.

Just as we are able to see the lead tank through the early morning mist advancing on our lines a great rumbling and clanking can be heard approaching from our rear and a massive old Churchill tank comes forward with a flail attached to the front which is a drum that rotates with heavy chains that beat the ground and detonate teller mines, this was followed by several Sherman tanks. A short battle followed in which one Tiger was disabled and the other two captured. We immediately fired off forty-eight twenty-five pound mortar bombs to drive back the advancing infantry. Sgt. Reynolds, Pte. LeJour and I were crouching down shoulder to shoulder behind a three foot bank waiting for a message to come over our radio receiver.

Just as I jumped up to take the message a sniper’s bullet struck LeJour just below the steel helmet and he fell over dead without making a sound. We all felt very bad about LeJour, his little sister was only four when he enlisted and now she was writing letters to him every week.

The enemy now know where we are and they shell and mortar bomb us mercilessly for three hours. We maintain a constant mortar and machine gun fire to keep the enemy from advancing, eight enemies gave themselves up as prisoners and we sent them down the line. Cpl. Aikenhead was killed standing in his slit trench when a shell struck a telephone pole and riddled him with shrapnel. Cpl. Schwartz was wounded in the shoulder, Cpl. Buckanen in the leg, Pte. Messinchuk and McDonald were buried in their trenches but some of the boys dug them out before they suffocated. Capt. Wells was wounded in the hand, Sgt. Zulkowski was lifted by a blast and passed out for fifteen minutes and had to be evacuated.

I have my trench four feet deep now and got a bit of sleep. Early in the morning we managed to bring some ammunition up and fired all day, in the afternoon we took fifty prisoners. We hadn’t been able to bury our dead so about midnight we carried LeJour and Aikenhead out to the road and Lt. Rankin, Pte. Judd, Pte. Ditto and I started to dig graves, the enemy must have heard us because a machine gun opened up on us, the tracers always appear to be coming straight at us so every time they fired we would dive into the graves. Later, when the battle front moved on, the graves detail would remove the bodies to a permanent cemetery.

Unfortunately one of our artillery shells from behind us fell short and killed two of our boys at our forward observation post. We have been unable to get rations up, however we have a half bushel of corn which Sgt. Reynolds had previously scrounged, we pound this with our rifle butts and cook it just at daybreak when we can risk a fire. The constant shelling is taking its toll on the nerves. We hear that they have eight shell-shock casualties down at the Regimental Aid Post, some have to be tied to their stretchers. Ogimma is crying and some of the fellows are getting a little shaky, if only we could get a little sleep.

The constant shelling finally stops. We post sentries and the rest of us go to sleep in our trenches. Cpl. Arnason and I are scheduled to go on sentry at midnight, a light rain is falling and we have stretched our ground sheets over our slit trenches to keep some of the rain out. When Pte. Morin and McDonald come off shift to wake us up Morin steps in Arnason’s trench and pulls his ground sheet down.

Normally I would stay by the radio in the middle of our position in case a message comes over in code, however Arny is one our signals and can decode in the dark as well as I can, so I suggest that I would go out to the forward listening post and he could fix up his ground sheet. Two minutes later, just as I step into the sentry post, a lone mortar bomb comes whistling down, It must have landed right on Arnason because it threw him ten feet up on the bank. I can hear him crying like a baby. De Montarnel, Turner, Castiday, Robbie, and McKay put on field dressings and tourniquets, he has lost one arm and one leg, and two of the boys run back to Company HQ for a stretcher, Capt. Wells brought his jeep up as far as he can and administers a morphine injection and they head for the Regimental Aid Post, however, Arnason dies before they get very far.

The bomb had started a fire in our ammo boxes so with a fire to aim at the enemy lobbed in mortar bombs the rest of the night. Morin is wounded in the legs, Major Walker in the arm and leg, Judd suffered a burst eardrum. Our platoon has suffered eleven casualties, we’re down to nineteen men. This evening I experience a feeling of sadness when a bugler played the last post for the dead as we move on from the field of battle.