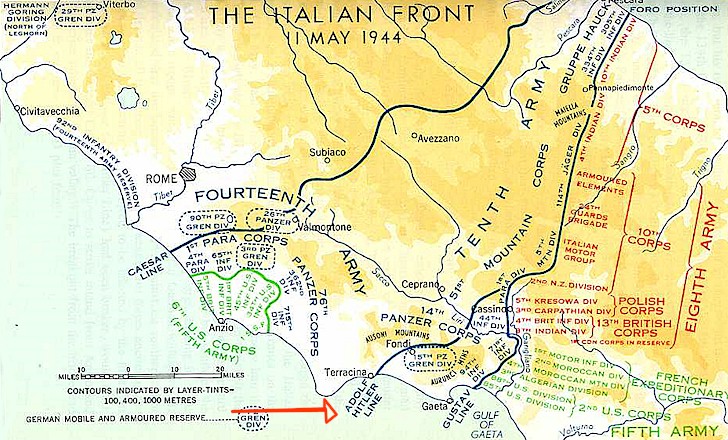 Continuation of the War Journal of Corporal Harry Winther

Our orders from General Montgomery were to cross the mountains to the west side of Italy for the attack on the Hitler Line, I travel in our Bren gun carrier, which is an open vehicle on tracks. We drove through either rain, fog, or clouds and were quite wet and miserable when we reached our destination. Fortunately it was a house.

Someone had already lit a fire in the cook stove. I was one of the first to arrive so I threw my pack and blankets down beside the stove, this was my chance to get dry and warm and sleep all night. I had just stretched out on my blankets when Lt. Rankin walked in and announced I need three volunteers; you, you, and you. We are going on a reconnaissance patrol, be ready in half an hour (so much for sleeping all night). I put some Tommy gun magazines in one of my ammunition pouches and bully beef, cheese and hardtack in the other.

We had seven miles to go to a spot on the mountainside which they showed us on a map a bit behind the enemy lines. We were to arrive before daylight as the last of the route would be under enemy observation. Capt. Wells, our company commander picked us up, he would bring us forward in his jeep, the only problem was that after about a mile there was no more road. On withdrawing the enemy had dynamited the bridge across a little river.

From here on everything had to move by foot. As we moved off down the road we found that every bridge, culvert, and cliff had been blasted and we ended up detouring through all the little streams that come down the mountain. It had started raining again, our boots were full of water, in places the brush was almost impenetrable. Finally we reached a railroad going in our general direction and by this time it was pitch dark.

Everything went fine for a mile or so when suddenly Lt. Rankin stopped, the railroad was shaky, we felt around and discovered we were on a bridge which came to an end just a few feet ahead of us. We made our way back, climbed down the bank and managed to cross the river on the rubble from the dynamited bridge. In the distance we saw some huge fires, when we finally reached them they turned out to be large piles of charcoal which had been set on fire by the retreating enemy. By this time we had reached Battalion headquarters of the VanDoo’s, the forward infantry. Lt. Rankin checked in with Colonel Benachi when he came back he said he had good news and bad news.

The good news was that they were sending out a patrol with a radio to contact their forward company and we could accompany them. The bad news was that if the enemy didn’t cut our throats, his men would probably shoot us when we tried to come back through their lines in the dark. All went well for a couple of miles until the VanDoo’s lost radio contact and wouldn’t go on.

We continued on although we were not too sure of where we were in relation to the front. Suddenly we found ourselves walking on cobblestones and realized that we were entering a village. We had a little conference and agreed that we didn’t know if the village was occupied by our troops or the enemy as we were quite close to no man’s land however our fearless leader said we’ll spread out five paces apart and take our chances.

We marched down the middle of the street with our hobnailed boots echoing on the cobblestones, suddenly a challenge rang “Cardiff” and we all stopped dead. Lt. Rankin was so shocked that he couldn’t think of the password, however Sgt. Reynolds who was always prepared called out “Wales”. The voice up ahead ordered one to advance and be recognized. When he was satisfied, another soldier came out of the shadows beside me and said, “You don’t know how lucky you are, we just drove an enemy platoon out the road you came in on thirty minutes ago and we’re not enough men here to take prisoners.

I was trying to decide if I should open fire with my Bren gun or take you prisoners.” We were escorted to their command post where their platoon sergeant had some coffee on, he had a candle on the table and we were able to determine where we were on our own map. From this point on we followed the road, however, by five o’clock we were reaching a point of complete exhaustion. We noticed a dim light beside the road and first thing we knew Lt. Rankin had drawn his pistol and opened the door to a little house. 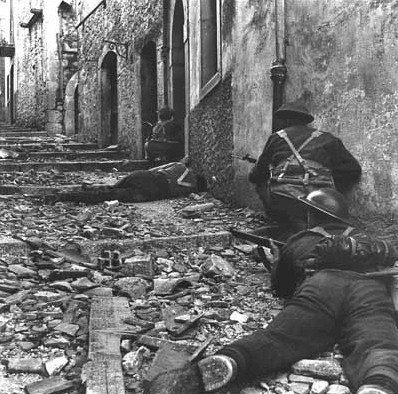 As it turned out the occupants of the house were friendly, two Italian families complete with five small children. We told them we were very tired and would like to rest. They indicated two large double beds so we immediately removed our boots and crawled under the covers. Lt. Rankin and Sgt. Reynolds are in one bed and Cpl. Turner and myself in the other.

When we awoke two hours later our hosts had cleaned our boots and dried our coats. Coffee made from roasted barley was served and after making arrangements to hopefully stop in on the way back we were on our way. We were a little concerned because, by now, it was daylight however a heavy fog had come down which enabled us to reach our destination on the mountainside about a mile into no man’s land.

Our orders were to observe an enemy concentration across a little river and determine the number of troops, tanks, guns and vehicles and, if possible, which regiments they belonged to. We had split into two parties and agreed to meet at a certain house after dark. The fog had lifted and we counted reinforcements being brought in all day. I thought we had all the information that was required, however about four o’clock Lt. Rankin decided it would be important to find out if this was one of the crack regiments. He told me he would cross the river and sneak up to the edge of their camp and try to read the insignia on their vehicles and uniforms. I was to wait until half an hour before dark, and if he was not back, to take our information and make my way to our rendezvous with Reynolds and Turner.

By dark he hadn’t returned so I made my way down a goat trail to avoid stepping on anti-personnel mines. When I began to approach the Van Doo front lines I grew apprehensive as they were notoriously trigger happy so I walked along the side of the mountain and managed to come around their left flank.

When I reached the road I realized I was past our meeting place so I started back toward the front. By this time it was pitch dark but I finally found the little house. I listened at the door and heard Sgt. Reynold’s voice, I didn’t hear Cpl. Turner reply, instead I heard a British voice. This seemed very strange to me as to my knowledge there were no British troops within five miles; only Free French, Polish, Seik, and Canadian Divisions. I decided to take no chances so I put the strap of my Tommy gun over my right shoulder so I could hold it with one hand, cocked the action, set it on automatic, released the safety and put my finger on the trigger.

As Reynolds passed me he whispered “Get out of here”. I shut the door and we took off into the darkness. As soon as we were away Sgt. Reynolds said to me, “That was an enemy patrol. The only person who spoke was the sergeant. When Turner tried to strike up a conversation with one of the other men no one answered. No one but the sergeant spoke a word while we were waiting.”

We set out on the road back to our camp and soon arrived at the home of the Italian family where we had rested. They invited us in for something to eat, cabbage, bread baked in coals, pig’s feet, and coffee for which we were grateful as we were very hungry.

We arrived in our camp after midnight and turned in our report to Brigade Intelligence. Capt. Wells woke me at six o’clock to go back to look for Lt. Rankin. The engineers had repaired some of the bridges so we only had to walk four miles. We questioned the Italian family and found he had stopped there at three in the morning so we knew he was safe. We all arrived back in camp about three in the afternoon. Lt. Rankin turned in his information to Brigade Intelligence, apparently the patrol was considered a success as I received a promotion.