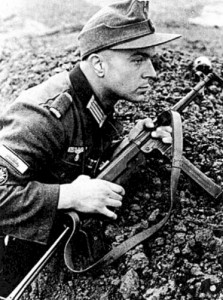 Original WW2 MP40 slings were made of leather and either dyed brown or black and came with the cross-hatch “ricasso” pattern. The MP40 sling measures approximately one inch wide and is roughly 47.5 inches in total length. 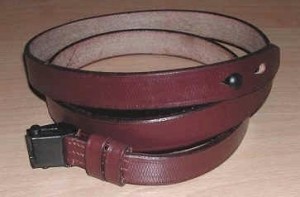 Markings were also similar to the KP98 slings however the MP40 also included the designation “MP38 u. 40”.   As MP40 slings were made after 1940 they would not have any full names on markings and would only have a marked code.

During WWII the button holes become worn and the leather got soft allowing the buttons to slip out as the holes became larger. Many soldiers buttoned on the K98 sling’s “Haltestuck” to help.

Was there a correct way to mount this sling? Common sense calls for the mounting being font to back, with the button near the rear. However many soldiers mounted the opposite way – back to front.

After the war these slings were still widely used especially as the Austrian made "Stolla Wien" sling.