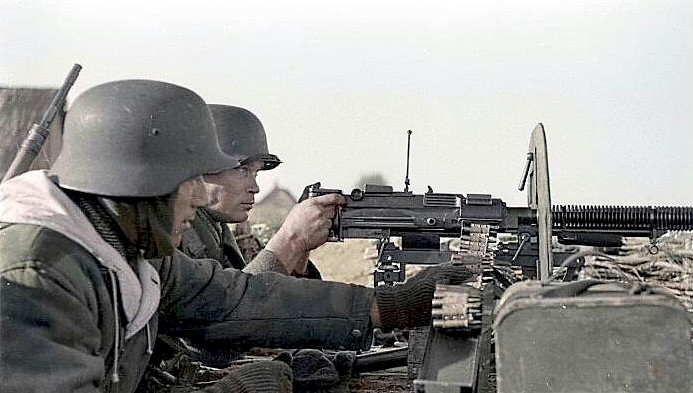 To View this blog on video instead of reading - click here:  https://www.youtube.com/watch?v=Kc1CLpkdieU

Due to the types of warfare taking place prior to WW1 helmets were not at all like what we use in today’s times. Made of cloth or leather they did little to help protect the head during battle.

Think of the German Pickelhaub , the spiked boiled leather helmet the German’s wore up until 1916, headgear made to protect from saber cuts not for bullets or shrapnel.

Once the highly dangerous trench war of WWI began these types of helmets became a big problem and of little protection. Due to the high number of casualties and deaths as a result of severe head wounds during the Great War the French designed and initiated the use of the first steel helmet.

This helmet, the Adrian Helmet, became the helmet by which all further steel helmets evolved from.   The British army then developed the Brodie Helmet which would also become the helmet used by the US army.

The Germans, slow to follow suit, finally developed the Stahlhelm or steel helmet.  Initially, in 1915, the Army Detachment of the Vogesen developed a new helmet that consisted of leather but with a steel plate to protect the soldier’s eyes and nose. 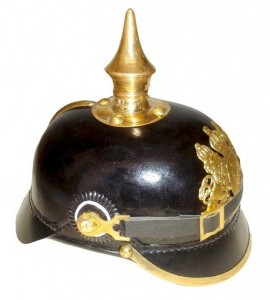 By 1916 the Germans developed the M1916 and this helmet became instantly recognizable by it “coal shuttle” shape. The design of the M1916 was made by Dr. Friedrich Schwerd from the Technical Institute in Hanover.  After studying the types of head wounds that were suffered in battle Schwerd designed and produced the Stahlhelm based on a 15th Century sallet. The helmet was made with a much harder material, martensitic silicon/nickel than the Brodie helmet which was steel. Finally completed in February 1916 it was first distributed to the troops of Verdum and was a marked improvement for the troops.

The M1916 went through several changes in its early life mostly with the chin strap arrangement and the internal liner systems resulting in the M1917 and M1918 helmets. The M1918 came designed with a cut out on the sides of the helmets for the Ears. After Germany lost the Great War, most of the M1916 helmets were destroyed as per the terms of the Versailles Treaty, though some remained for use by the police. 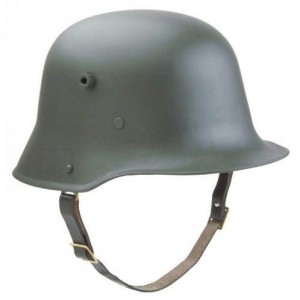 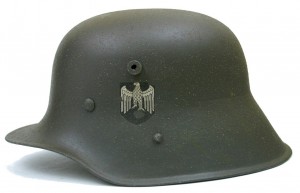 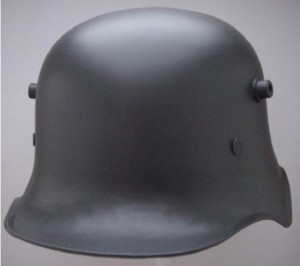 By 1932 a new helmet was being modeled to replace the older types. The new helmet, M1933, retained the original shape but it was made from a composite plastic material which was more lightweight. The M1933 helmet was only used in small numbers and was quickly removed from service after the introduction of the M1935 helmet.  The M1933 though no longer issued to the military was used still used by police and fire brigades.

With Dr. Fredrich Schwerd again in charge of the improvements to German helmets he worked with the Eisenhüttenwerke Company in 1934 to rework and re-design and test a newer model. This would become the M1935.  Made with pressed Molybdenum steel, the size of both the visor and skirt were made smaller with the edge of the shell still being rolled.

The ventilation holes became smaller when they were replaced with hollow rivets and a major change was made to the helmet liner making the helmet considerably more comfortable to wear and easier to adjust.  It was also outfitted with a new chinstrap to replace the cold carbine clip and roller buckle style. 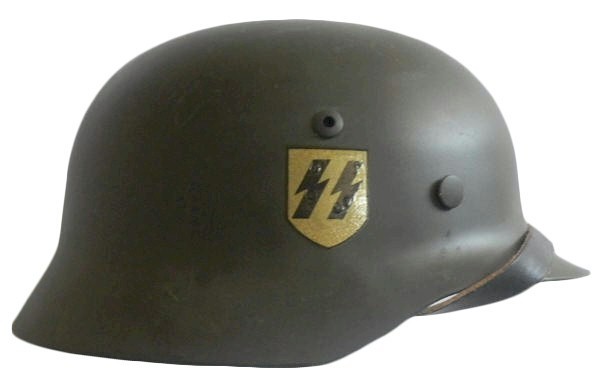 The M35 would begin distribution in June 1935. During the first 2 years more than 1.3 million were manufactured.  One variant of the M1935 was issued to Fallschirmjagers.  In order to help reduce the risk of a head injury upon landing from a jump, the projecting visor and flared rim were removed from this helmet.  This major change in the design of the helmet called for a change in the liner and chinstrap designs.

Due to the economics of a long war, the need for faster production and a change in manufacturing methods slight modifications were made to the M35 resulting in the M1940 and M1942. The M1942 no longer came with the rolled edges and was stamped of a single sheet of metal, to save money and increase manufacturing efficiency.  Changes also occurred to the ventilation hole; instead of being an external metal piece that was pressed into the hole after the helmet was made it now became part of the helmet during it's pressing. 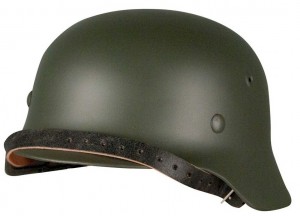 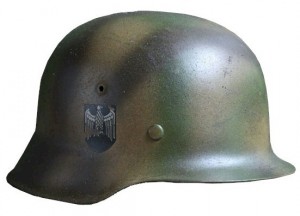 Much more uncommon and hard to find where two variants made in 1944 and 1945.  The M1944 helmet, which was a simpler helmet with sloped sides, similar to the British 1944 Type MKIII.  Hitler did not approve of these helmets so there was limited distribution. The M1945 variant, was like the M1942, however it no longer had the ventilation holes.  These were of limited supply due to being manufactured during the final months of WW2.

To prevent rusting all of the German helmets were painted inside and out. The Heer M35’s had a smooth field gray (green grey) finish and the Luftwaffe with a grey blue finish, SS helmets used a satin black finish. 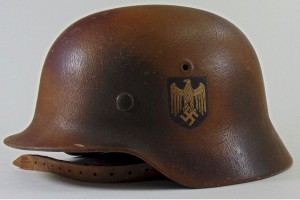 With the modification of paint processes and the change of manufacturers and paint suppliers it was difficult if not impossible to maintain paint color or texture consistency.  Another big change to the color of helmets was made by the soldiers themselves.  With helmets being repainted by the men who would depending on their own personal circumstances and experience. There really were no two helmets made that were of the same color.

Helmets were made in 5 different shell sizes and liners as follows:

Decals were applied to one or both sides of helmets to designate the unit or branch of service the wearer was in. Initially the M35 helmets had the Imperial Germany National Shield – tri-colored decal, with black, white and red stripes placed on the right side. The left side was for the insignia of the branch or organization.  There were a number of printing companies that made decals so there became a wide variance in the look and style of the decals during the war.

The step of adding decals to helmets during manufacturing was stopped in 1943 to reduce visibility for the wearer and to quicken production.

Kreigsmarine:  Same as the Heer above but in gold.

Luftwaffe:  A decal with the side view of an eagle in flight holding a swastika.

SS: Black runic initials on silver shield (these were normally applied to the right side of the helmet)  In August 1935 Heinrich Himmler introduced the National Socialist Party decal. 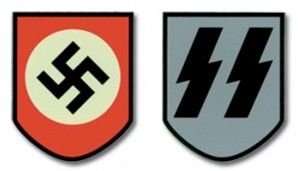 Germany exported many of their helmets to a variety of countries. The M1916 was used by the Argentine Army, Poland, Irish Defense Forces and the Yugoslav People’s Army up until 1959.  The M35 helmet was used by the Polish Home Army and was exported to China where it became the main helmet of the Chinese Army.  Germany also exported its helmets to Spain, Hungary and South America.