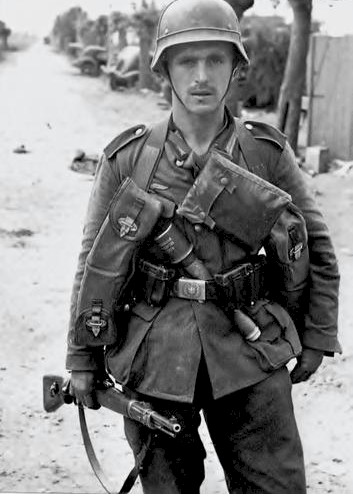 Everything you ever wanted to know about the German Belt Buckle!!

The German WW11 Belt Buckle was a basic addition to the Soldier or Officer’s uniform. There were well over 100 different types and designs of belt buckles issued in WW2 and even non-military belt buckles were made with a Swastika.  Just about every organization of the military developed its own uniform, including their own distinct belt and belt buckle. Buckles could be smooth or pebbled, in a varied of colours depending on the organization that issued in a variety of designs.  The Germans used intricate designs for their belt buckles and they were always high quality.

Though Military belts and buckles have been around for centuries in 1847 the buckle as we know it now with the quick release catch was introduced. During WW11 the belt and buckle were worn with the buckle being positioned on the right side and the buckle catch on the left side.

As indicated many buckles were made during WW11 we will touch on the top 5 division’s buckles.

This is by no stretch of the imagination all of the buckles used or made during that time and that many authentic buckles from WW11 could have no markings or have any remaining paint making identification sometimes difficult.

The German Army, one of the components of the Wehrmacht (Defence Force), was comprised of divisional ground troops, including infantry and artillery.

Up until 1936 a standard belt buckle was used from 1919 – 1936, considered as the Weimar era. This belt buckle was replaced in early 1936 keeping the basic design of the Reichswehr buckle but adding the Wehrmacht’s stylized national eagle.

This buckle was worn during the whole Third Reich period with only small manufacturing variations. Different colors were used for the painted finish of the buckles and were determined by what uniform was to be worn with the belt and buckle.

Normally these buckles came with a leather tab that help support the ammunitions pouches however in 1942 due to the shortages of leather this tab was discontinued, though not all manufacturers followed this trend.

Normally made of aluminum which is injected molded, the centre of the buckle features the Wehrmacht Eagle with down swept wings, it is clutching a swastika. The eagle is encircled with inner and outer simulated twisted rope border between which is an embossed oak leaf cluster on the bottom.  On the top is the script “Gott Mit Uns”, (God With Us).

The German Luftwaffe, another one of the components of the Wehrmacht (Defence Force), was established in February, 1935. Prior to this it was called the Reichsluftwaffe and forces utilized two types of belt buckles, either the Pilot Base (DVL Fliegerschaft) buckle or the German Air Sports Association (DLV  Deutscher Luftwspot Verband) buckle.

Two new belt buckles were introduced with the Luftwaffe designation one for Enlisted Men and Non-Commissioned Officers and one for Officers. Some minor alterations were made to the EM/NCO buckles during the war, in 1937 a change in the eagle pattern and in 1940 a change in construction. Also in 1940 a blue-grey colored version replaced the already used silver version.

At this time an olive drab version was introduced for tropical troops.

Initially the belts that were worn with these buckles where brown leather but were then blackened during the war. These also had leather tabs, as did the Heer Army buckles; to help support ammo pouches put were discontinued in 1942.

The Luftwaffe buckles were die-stamped made of steel. With an oval laurel leaf wreath in the centre of the front of the buckle it had flying eagle in this wreath that was clutching the swastika in its talon. The inner field of the wreath was a pebbled pattern.

The SA (Sturmabteilung) also known as Stormtroopers was the paramilitary organization of the Nazi Party. This political party help Hitler rise to power in German in the 1920’s.

The SA was also the first paramilitary group who gave themselves pseudo military titles. The infamous SS was originally a branch of the SA.

The SA buckles had a circular motif in the front of the buckle. There was a laurel leaf wreath encircled with an inner and outer simulated twisted rope border. Inside was a Wehrmacht’s stylized national eagle with raised wings that is holding a smaller circular laurel leaf wreath in its talons.  Inside this small wreath is an embossed swastika.

The Allgemeine SS, Schutzstaffel, or Protection Squadron just simply known as the SS was originally formed in May 1923. The SS wore the stylized “armanen” Sig runes and were under the command of Heinrich Himmler. The SS troops were among the most feared in the battle front.

As the SS was initially under the SA branch, early units wore the standard SA belt buckle.

Hitler himself designed the new SS belt buckle for wear by Enlisted Man and Non-Commissioned Officers for the SS in late 1931.

Any SS items manufactured came under the quality control of the RZM (Reichzeugmeistere - National Equipment Quartermaster), and had to be marked with an RZM/SS approval mark. In 1943 though the SS took over full control of production of their uniform items and did not have to have RZM approval.

Generally the buckles were injection molded and made of aluminum. Prior to 1936 they were made of Nickel or silver. The buckle has a National Eagle without stretched wings, clutching a wreath. Inside the wreath is a swastika. Both the Wreath and the swastika are encircled with an inner and outer simulated twisted rope border and the words "Meine Ehre heißt Treue!", (My Honour is Loyalty!) between these two rope circles located at the top.

Initially the Hitler Youth which existed from 1922 to 1945 was a paramilitary organization of the Nazi Party. It is the Youth equivalent of the SA (Sturmabteilung).  It was for male youths from the ages of 14 to 18.  There were also sub-groups for younger boys’, the Deutsches Jungvolk for boys ages 10-14 and the girls group Bund Deutscher Madel.

The Hitler Youth buckles saw a number of changes over the course of the war, from a variance in the artwork design, and the initial use of silver that was then changed to gold in 1938. Regulations then stated that the Hitler Youth wear the same colored buckle that matched the color of the shoulder board insignia devices.

The buckle is made of aluminum with a nickel/silver plate and came with a black leather belt with a brown inside.

The buckle has an eagle clutching the double triangle symbol of the Hitler Youth. There is an inner and outer simulated twisted rope border and the words “Blut Und Ghre” (Blood and Honor) between these two rope circles located at the top.  There is ribbing between the two rope circles.