Among the specialized items of equipment issued to British airborne troops in WW2, perhaps the most popular with the troops themselves was the airborne smock. The first pattern was modelled on the German parachutist’s jump jacket, which was made to be stepped into and pulled up like a pair of overalls, except that the legs were cut off just above the knee.  This was replaced by the “Smock Denison Airborne”, (listed as such in the quartermaster’s stores), designed by Major Denison.  This was a camouflaged-pattern, cotton, semi-waterproof garment that was put on and removed over the head like a jersey.  It had a zipper collar, which opened as far down as the lower chest, knitted woolen cuffs and four external pockets, two on the chest and two below the waist.  The inside of the collar was lined with khaki flannel.

It had a tail on the back, which could be taken up between the legs and fastened by press-studs inside the front skirt of the smock, to prevent the skirt riding up. The tail sometimes rubbed uncomfortably when the wearer was running, and soldiers had a tendency to leave them unfastened and hanging down.  Arabs in North Africa referred to the soldiers of the 1st Parachute Brigade as “the men with the tails”.  A later version of the smock had press-studs on the back of the skirt so that the tail could be folded back and fastened to the back instead. 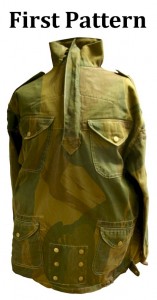 The Denison Smock was worn over the standard issue battledress. It was an excellent garment and highly prized not only by airborne soldiers but also by commandos, who were issued with it in late 1944.  Its outside pockets, and the fact that it covered the wearer’s nether regions, made it a considerable improvement on battledress, which had been introduced in 1939.  This had been modelled on fashionable ski outfits of the late 1930’s and was not a clever design for a fighting soldier.  The blouse had insufficient pockets provided no cover for the nether regions and after a few minutes crawling around would detach from the pants.  The map pocket on the front of the pants, instead of the side, made extracting maps difficult while lying down takin cover.  Many parachute soldiers modified their battledress pants by sewing pocket on the side.

The Denison smock was worn under webbing equipment, small pack and ammunition pouches. It was though found that parachute rigging lines occasionally snagged on equipment after the parachutist had left the aircraft, causing accidents and even fatalities.  This led to the introduction of a sleeveless canvas over-smock, with full-length zip, and tail, which was worn over the equipment and Denison Smock. 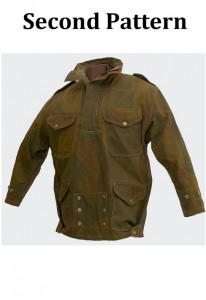 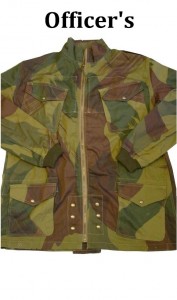 The over-smock had big elasticated pockets on the skirt for grenades, safer than descending with them clipped on the braces of the webbing and gave the wearer a “pregnant” appearance.  It was discarded after landing, and frequently the long zip was cut off and used to convert the Denison Smock to a full length zip garment.

The Denison smock was popular among senior officers, including those who had no connection with airborne forces but could use their influence to obtain an item of clothing that was supposed to be confined to either parachute or commando troops. Montgomery frequently wore a full-zip version with a fur collar, as did General Miles Dempsey commanding the British Second Army.

The Airborne or Denison Smock was an example of a really good piece for a kit; ad was worn by airborne soldiers and commandos until the late 1970’s.