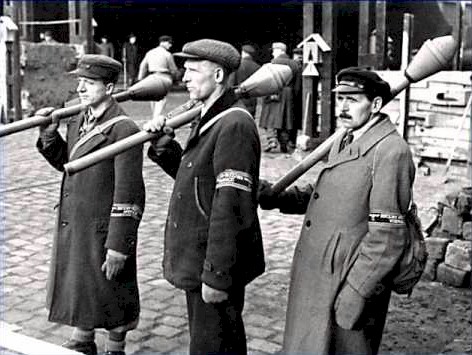 Hitler established the Deutscher Volkssturm, in English meaning German People's storm or People's army,  on September 25, 1944. It was first announced in a secret decree on October 18, the anniversary of the great victory of the Prussians, Saxons, Poles, Swedes and Russians over Napoleon at Leipzig in 1813, dubbed the “Battle of the Nations”.  Hitler was fond of identifying himself with selected events in Prussian history that suited his purpose, either for propaganda, or as self-delusion.  The Battle of Leipzig marked an important stage in the revival of Prussia after its disastrous defeat by Napoleon at Jena in 1806. 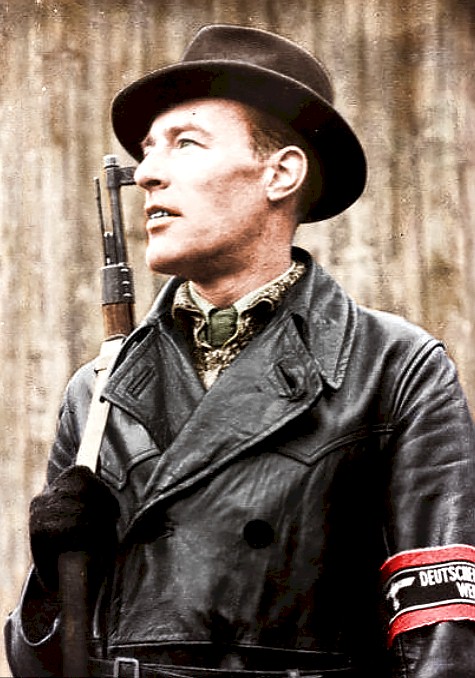 Hitler wished to draw a comparison with the Prussia of then and Germany now, the message being that although the country was being attacked on two fronts, all would come out right in the end. A nation under arms would mirror the work of the Prussians who reformed the country and revitalized its army during the Napoleonic war.  But the call to arms of the Volk (the people) did not strike quite the same chord in 1944 as it had in 1813. 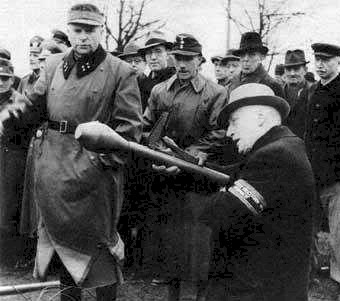 Hitler ordered Martin Bormann, Head of the Party Chancellery and his private secretary, to raise six million men. This number was based on the fact that in May 1944, there were over six million men exempted from military service among the German workforce.  However, the Volkssturm never achieved this strength.  The basic unit was a battalion of men ranging in age from 16 to 60.  The 16 year olds were predominantly Hitler Youth, while the older men were mostly veterans invalided out of service or graded as unfit for military duty.  They were supposed to be employed only in their own districts, but in fact many found themselves sent to the Eastern or Western Fronts once advancing Allied formations arrived on German soil.

The Volkssturm was commanded by Heinrich Himmler in his capacity as commander-in-chief of the Replacement Army.  While still in their districts the Volkssturm come under commander of the local Nazi party hierarchy.  Once deployed they came under army command.

War work still had priority, so training was carried out for four hours on Sundays. The men had to bring their own uniforms if they had them; otherwise they wore civilian clothes, and trilbys or flat caps.  Arms and ammunition were in short supply.  The most numerous weapons were Panzerfausts, the German hand-held anti-tank weapon.  During the final months of the war the Germans produced a Volkssturmgewehr (People’s Assault Rifle).  There were several marks of this weapon; most were crudely manufactured bolt-action rifles, some without a magazine, so each round had to be loaded manually after the previous one was fired.  Some had fixed non-adjustable sights.  From January 1945 to the end of the war a more sophisticated semi-automatic rifle was beginning to be produced.  It is not known exactly how many were made though the figure seems to be around 10,000.  Few exist today

The Volkssturm units in East Prussia were the most effective. It was here that the Landsturm had been raised in the previous century, so there was already a tradition for a people’s army.  Furthermore, it was in the east that the territory of the German homeland was first threatened in WW2 by the Red Army, and they were guarding their homes against invaders. 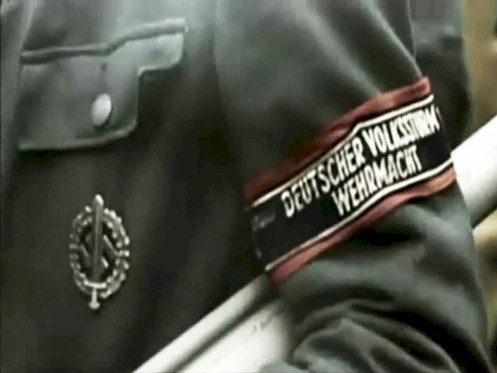 Right to the end, many Germans clung to the belief that the red Army might be held at bay while an accommodation was arrive at with the Americans and the British in order that the war should end with the smallest portion of Germany occupied by the Russians. All these factors combined to make the Landsturm fight harder in East Prussia than elsewhere.

The VOLKSSTURM WEHRMACHT  "uniform" was only an armband that they wore and silver collar pips.  The armband was black with the words "Deutscher Volkssturm Wehrmacht" on it and had red stripping.     As the German government could not issue all of its members uniforms the Volkssturm members used their own civilian clothing to try to make something look like a uniform.

The armbands were produced by many different manufacturers making for variances in design such as the shape of the eagles, colors of the bad, and the swastika wreath, etc.

Pips were ranked the same as Gruppenführer with 1 pip, Zugführer with 2 pips, Kompanieführer  with 3 pips and  Bataillonsführer with 4.