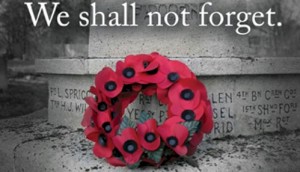 1.  It Was Originally Called Armistice Day

Remembrance Day was initially intended to commemorate the Armistice of Compiègne. A signed agreement between Germany and the Allies putting an end to WW1.   The terms where: cessation of fighting, withdrawal of German troops, exchange of prisoners and a promise of reparations.

The name changed to Remembrance Day in 1931 following, in 1954 for the U.S. and still is called Armistice Day today for some countries.

Also known as Armistice Day, Independence Day or Veterans Day many countries around the world observe some type of holiday or celebration for Remembrance Day.

In some countries such as Canada it is a national statutory holiday.

Most of the 54 Commonwealth member states such as the U.K., Canada, Australia, France, Belgium, Poland and others observe the tradition of Remembrance Day.

The United States changed the name of this holiday from Armistice Day to Veterans Day in 1954.

American’s first observed it on November 11 then it was changed to the 4th Sunday of October and finally in 1971 it returned to November 11.

In Canada from 1919-1931 it was observed on the first Monday in which November 11 fell, and then this also became the Canadian Thanksgiving.  In 1931 this was changed to November 11 and removed Thanksgiving to its own day.

Though the Armistice was actually signed on November 11, 1918 it was signed at 5 a.m. However as per the terms of the agreement peace did not come until six hours later, when the “guns fell silent”. This is where the 11th hour came from.

5.  The Poppy Was Started By a Canadian But Popularized By an American

The symbol of the poppy came from a Canadian when it was taken from the poem by Canadian Lieutenant Colonel John McCrae "In Flanders Fields,” The custom though of wearing the poppy was actually started by Moina Michael, a YWCA worker who, inspired by the poem, decided to wear a silk poppy in commemoration.

6.  Not All Poppies Are Created Equal 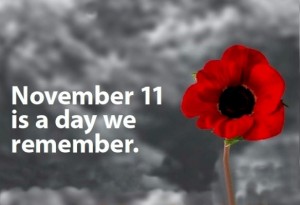 Initially poppies had a black centre and then during the 1980’s they began having a green centre which was supposed to reflect the colour of the hills in Flanders. This was reverted back to its original colour in 2000 as this colour represented the actual poppy more so.

There has most recently been a move to add white poppies for Remembrance Day as a symbol of peace in but this has been meet with criticism.

8.  There Is a Right And a Wrong Way To Wear a Poppy

The poppy should always be worn on the left lapel, close to your heart. They may be worn as early as two weeks before Remembrance Day but they are not to be worn after November 12. The poppy is to be left on the tomb of a veteran or place where a ceremony has been held for respect to the fallen soldiers.

10.  The "Last Post" Originally Signalled The End of The Day

The bugle call of the last post is thought to be a Remembrance Day tradition however it was really meant to indicate to any soldiers still on the battlefield that the fighting was over.