Be the first to review this product
$14.95
Out of stock
SKU
CN314
Add to Wish List Add to Compare 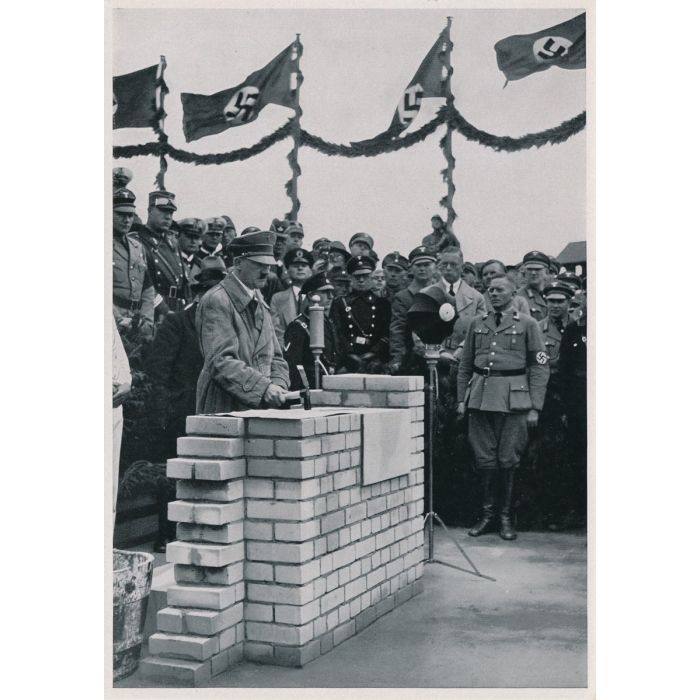 This is one cigarette card from the collectible set ADOLF HITLER. Collective work No., 15 Group 66, Image No. 81.  "Hitler Lays the Foundation Wall for the Housing Community in Adolf-Hitler-Koog".  Adolf-Hitler-Koog later known as Dieksanderkoog, was new housing land surrounding by diking used as a Work Creation measure in Dithmarschen, Germany during the Nazi era. This cigarette cards measures approximately 4 1/2" x 6 1/2".

Larger cigarette cards, ones that could not fit into a cigarette package, were introduced later as an added collectible.  You would receive “points” upon purchase of cigarettes and these “points” could be accumulated and mailed into the manufacturer for larger collectible cards sets.  Books, or albums, of a highly descriptive nature were also purchased from cigarette companies, where you could paste in your cards in blank spaces provided in the books. Some of these books could contain as many as 1000 cards.  Just as in sports cards these were highly collectible and very tradeable.  Books for sets included:  Adolf Hitler, Deutschland Erwache and Kampf ums Dritte Reich.