Be the first to review this product
$125.00
Out of stock
SKU
G925
Add to Wish List Add to Compare 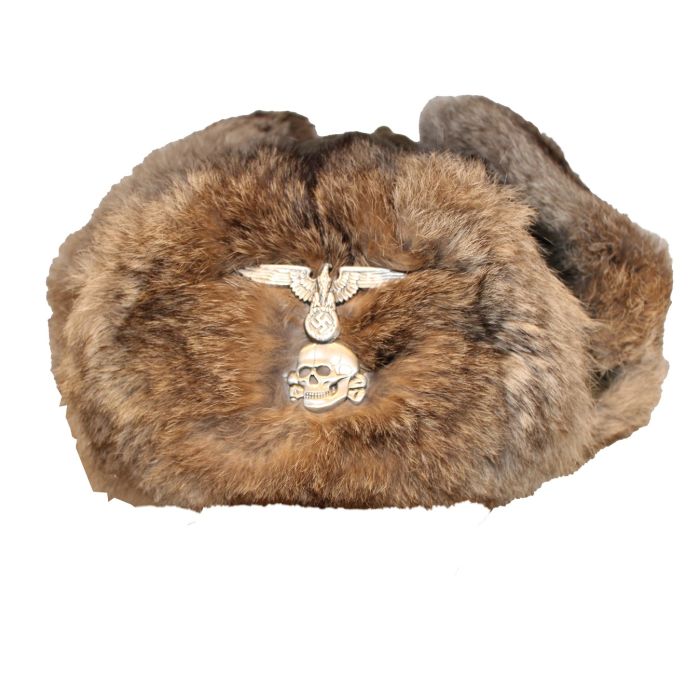 The forehead flap has 2 press studs with fold down ear flaps backed with rabbit fur.

The flaps are held in the "up" (open) position by a cord.

The flaps can be tied under the wearer's chin with same cord .

This is one nice rabbit fur cap.

Picture below of Sturmbannführer Wünsche before the battle in Kharkov, wearing a German ushanka.

The severe cold encountered on the Russian front in the winter of 1941/42 found the Germans completely unprepared not only in heat retaining cold weather garments but also snow camouflage garments. This resulted in numerous, hastily improvised and makeshift heat retaining and snow camouflage items being utilized including everything from civilian winter clothing to white bed sheets.

After the winter of 1941/42 the Oberkommando des Wehrmacht, (High Command of the Armed Forces), recognized the need for heavier winter clothing and testing began in the spring of 1942 to develop suitable garments.

In April 1942 Hitler approved the chosen design, and the first models were issued in the autumn of that year, included assorted winter fur caps. The fur caps were a standard issue item and were distributed to all EM/NCO’s for the winter season, (September 15TH to April 15TH), with other winter garments and were to be returned to the units storage depot at the end of the season for storage, repair and cleaning to be reissued the following September.

Originally Officers and senior NCO’s responsible for purchasing their own uniforms and headgear were required to purchase the new winter garments until regulations of December 1942 extended the issue winter clothing to all ranks in the colder theatres of operation.

Although there was no official standard model of the fur cap the most commonly encountered type followed the basic pattern of the Mountain and M43 caps with fold down back and side panels designed to protect the wearers ears and neck.