Be the first to review this product
$475.00
In stock
SKU
O810
Add to Wish List Add to Compare
Email 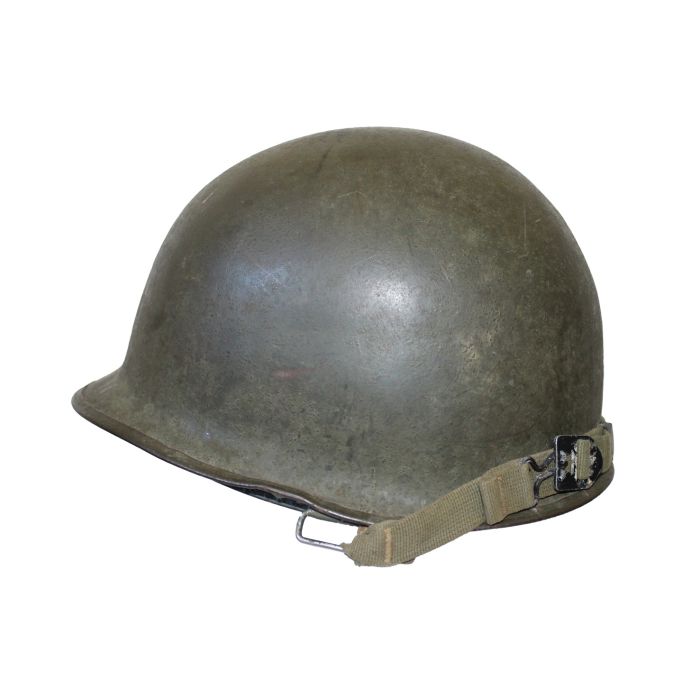 This helmet has the 43rd Infantry Division Black Leaf on red background  painted on the M1 liner.

The liner is complete with full suspension and sweatband as well as a genuine WW2 or Korean War era leather chinstrap.

Has a cotton herringbone twill (HBT) cloth suspension liner. This HBT suspension is held tightly within the M-1 helmet liner by rivets and a series of triangular "A" washers. The three upper suspension bands are joined together with a shoestring.

This  "HIGH PREASURE" liner has CAPAC/ Westinghouse Double stamp. It has an early insignia grommet on the front of the liner.

Schlueter Manufacturing Company of St. Louis, Missouri, June-1942 to August-1945 altered the McCord lot-numbering system with the addition of a capital “S” to differentiate helmets of their manufacture from those produced by McCord.

The 43d Infantry Division landed in New Zealand on 23 October 1942. The 172d Regiment arrived at Espiritu Santo, 26 October. The Division moved to Noumea, New Caledonia, in November and to Guadalcanal, 17 February 1943. Russell Islands were occupied without opposition, 21 February, and training continued. Elements landed on Vangunu and Rendova Islands against minor resistance, 30 June, but the enemy fought fiercely before relinquishing Munda and its airfield, 5 August. Vela Cela and Baanga were taken easily, but the Japanese resisted stubbornly on Arundel Island before withdrawing, 22 September. After training at Munda, the 43d moved to Guadalcanal and thence to New Zealand for rest and rehabilitation. On 19 July 1944, the Division assumed defensive positions at Aitape, engaged in patrols and reconnaissance at Tadji and along the Drinumor River, 25 July, and took the offensive, 8 August 1944, ending organized resistance on the 25th. On 9 January 1945, the 43d made an assault landing in the San Fabian area, Lingayen Gulf, Luzon. Under enemy fire, the Division secured the beachhead and fought into the Lingayen Plain by 12 February. The offensive was resumed against the enemy north and west of Fort Stotsenburg, 27 February. After ending Japanese resistance in the Zambales Mountains, the 43d swung south against the Shimbu Line. On 6 May 1945, the attack continued in the Bulucan area. Ipo Dam was secured and enemy opposition smashed in the Ipo area, 19 May. Mopping-up activities continued until 30 June 1945. The Division left Manila, 7 13 September, for occupation duty in Japan until it left for home.

During the Korean War , the 43d Division was again ordered into active Federal Service on 5 September 1950 and was moved to Seventh United States Army ,VII Corps in West Germany in 1951. On 15 June 1954, the 43d Infantry Division was released and returned to state control. Its elements, stationed in the Augsburg / Munich area, were reflagged as the units of the 5th Infantry Division.