Be the first to review this product
$39.00
In stock
SKU
G1038KP
Add to Wish List Add to Compare 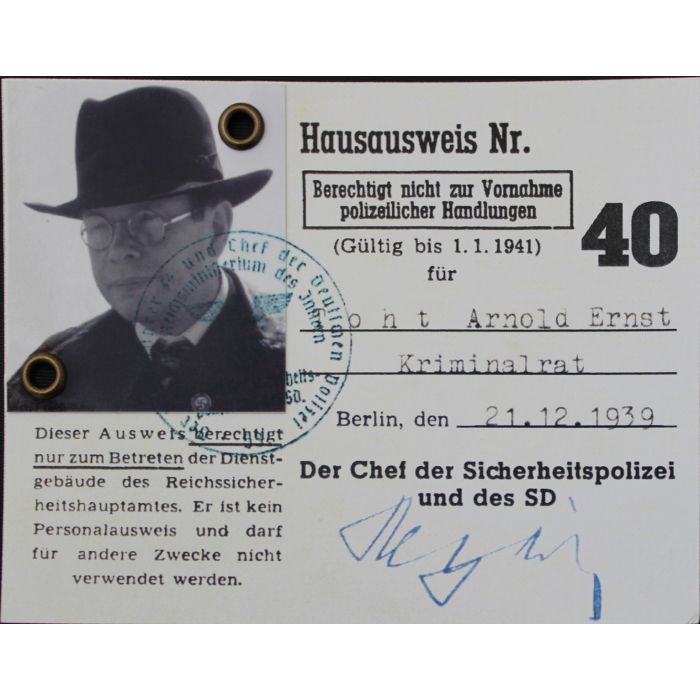 Major Arnold Ernst Toht, or just known as Toht, is the secondary antagonist of the iconic Indiana Jones film Raiders of the Lost Ark. He was a sadistic and ruthless Nazi Gestapo agent. He was portrayed by the late Ronald Lacey. Sturmbannführer Toht worked with René Belloq during the Nazi effort to locate the Ark of the Covenant in 1936.

Loyal to Adolf Hitler, Toht did everything he could to contribute to the search for the Ark. Although deep down he did not believe in the supernatural, it was the power of the Ark that would be his undoing.

This access pass is for entrance to the Nazi Secret Police Headquarters (Reich Main Security Office in Berlin - as seen in the photo's for Arnold Toht).  The pass was signed by Reinhard Heydrich.

Although this character is fictional, the pass is absolutely historically accurate.

Rough Translation from the ID Card Raiders of Lost ArK

Does not entitle him to carry out police acts

For The chief of the security police and the SD

This evaluation only entitles you to enter the building on Tuesday of the Reich Security Main Office.

It is not a peer ID card and may not be used for any other purpose.