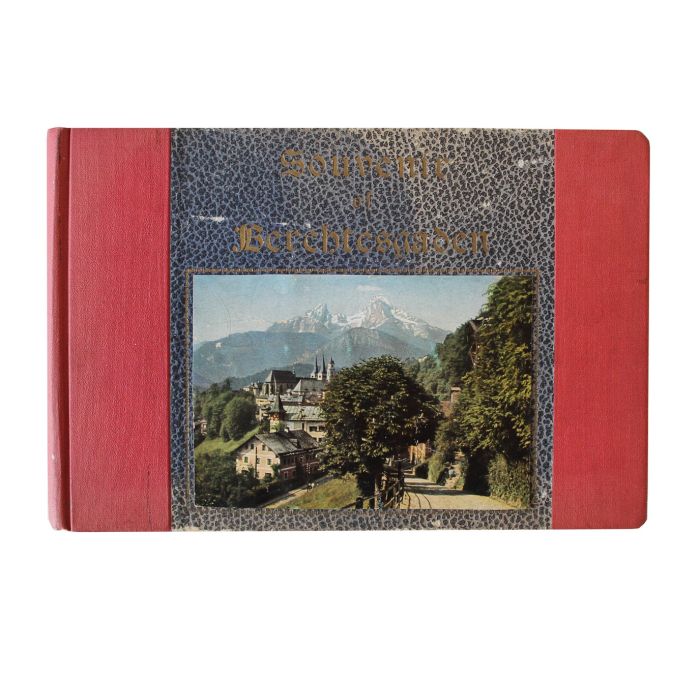 A very interesting original souvenir photograph album showing the retreats of the Nazi elite in the Obersalzberg outside the Bavarian town of Berchtesgaden.

This most unusual 36 page alubum contains alll original mounted photographs of Hitler's and Goring's houses, as well as the Hotel Platterhof and a special section devoted to "The Eagle's Nest".

Aside from the two panormas, the images are mounted with identifying description.

A fine souvenir photo album, compiling 36 pages of commercial b/w photographs of the Berghof, Adolf Hitler's home at Berchtesgaden, taken in its prime and following its destruction and occupation by Allied troops at the end of World War II. The album opens with views of "Haus Wachenfeld", Hitler's first residence at the site, before showing the Berghof following its renovation, with many views of both the interior and exterior. The final three images of the Berghof proper show it in its postwar state, ruined by a British bombing raid.

A section at the end is devoted to views of the "Kehlsteinhaus", or "Eagle's Nest", situated at the summit above Hitler's estate at Obersalzburg.

A fabulous addition to any WW2 German collection.