Be the first to review this product
$699.00
In stock
SKU
O806
Add to Wish List Add to Compare
Email 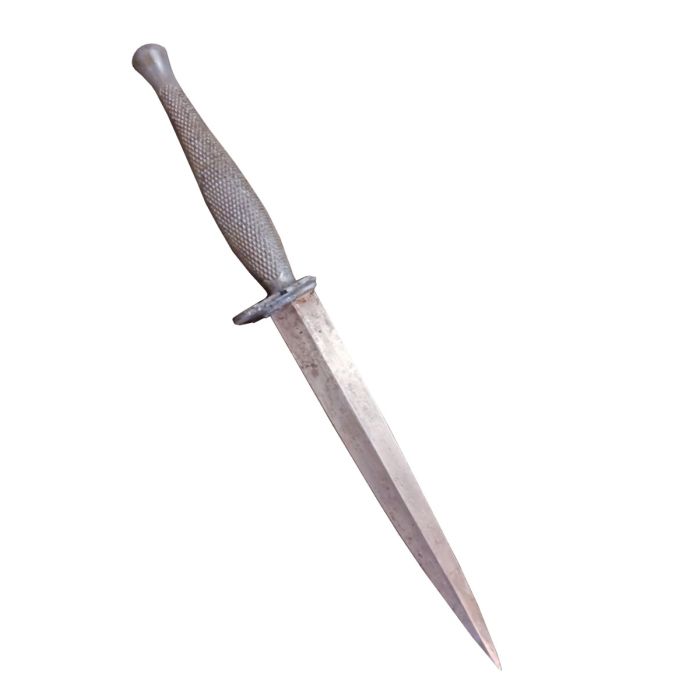 This is an original US WWII USMC Marine Raider Fighting Stiletto / Dagger / Knife.

The knife features a cast zinc handle, with USMC scroll and Camillus maker's markings etched on the blade.

Blade needs a good cleaning but did not want to damage the USMC scroll that is still legable . This is usually always missing from these knives.

Unfortunately the guard is damaged but one could be made or purchased to fit on this very rare knife.

These USMC Marine Raider Stilettos usually sell for 1000’s of dollars . so this is areal opportunity to get your hands on one at a greatly reduced price because of the damaged guard .

The design was heavily influenced by the British Fairbairn-Sykes fighting knife issued to Commando Units.

These knifes were issued to Marine Raiders ,Para marines and 500 to the 1st Canadian Parachute Battalion.

A good number of the 1st Canadian Paras were recruited into the 2nd Canadian Parachute Battalion, which contributed substantially to the U.S./Canadian First Special Services Force (FSSF). The FSSF eventually adopted the V-42 stiletto, using a similar, M6 style sheath with an extended belt hanger. The U.S. Marines also chronicled the use of their Raider Stiletto in battle, but eventually adopted the ubiquitous “Ka-Bar” style fighting utility knife, of which Camillus was also a major producer.

However, despite the original intent for Raiders to serve in a special operations capacity, most combat operations saw the Raiders employed as conventional infantry. This, combined with the resentment within the rest of the Marine Corps that the Raiders were an "elite force within an elite force", led to the eventual abandonment of the experiment.

Four Raider battalions served operationally but all were disbanded on 8 January 1944 when the Corps made the doctrinal decision that the Raiders had outlived their original mission. The changing nature of the war in the Pacific, with many large-scale amphibious assaults to come against well-defended islands, negated the requirements for small light units that could strike deep into enemy territory.

On 1 February 1944, the 1st Raider Regiment was redesignated the 4th Marine Regiment, thus assuming the lineage of the regiment that had garrisoned Shanghai in the interwar years and fought so gallantly on Bataan and Corregidor. The 1st, 3rd, and 4th Raider Battalions became respectively the 1st, 3rd, and 2nd Battalions of the 4th Marines. The 2nd Raider Battalion filled out the regimental weapons company. Personnel in the Raider Training Center transferred to the newly formed 5th Marine Division. Leavened with new men, the 4th Marines went on to earn additional distinctions in the assaults on Guam and Okinawa. At the close of the war, the regiment joined the occupation forces in Japan and participated in the release from POW compounds of the remaining members of the old 4th Marines.