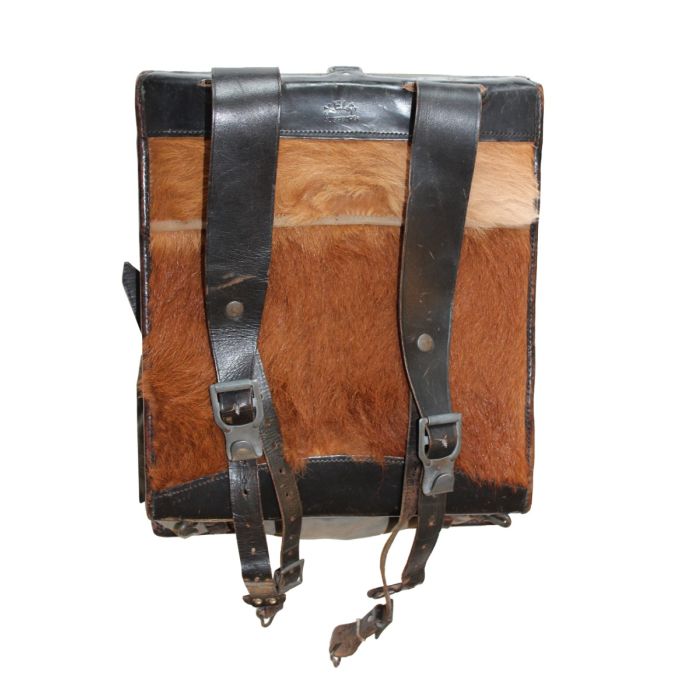 Original Item. Pony fur and canvas covered rucksacks such as these were officially called Tornister (Knapsack), first designed in 1934, and were used throughout the German armed forces. This style and size was specifically used by the SS Verfügungstruppe (Disposal Force - VT), which would later form the Waffen SS.

The design of this pack was later changed in 1938 to have shoulder straps that interfaced with the pistol belt as well as the bottom of the pack. As the war progressed the design was simplified to use less cowhide, and this version is the second, with Pony fur against the back but with the rest of the pack just being canvas with leather trim.

The pack measures approximately 12"W x 13 1/2"H x 3", and still retains almost all of its original parts. It has the all black leather for SS issue.

The pack also still retains the original SS RZM label inside, though unfortunately much of the information has worn off, as shown.

The RZM tag if fully visible would read:

Condition is very good, especially considering the age. The fur on the cowhide looks completely intact.  The shoulder straps are complete and the side straps that connect to the bottom of the pack are also still present.

The interior of the pack is in great shape except some staining inside bottom compartment and looks to be marked with the name ROCK inside.  The various buckles and straps all look to be present.