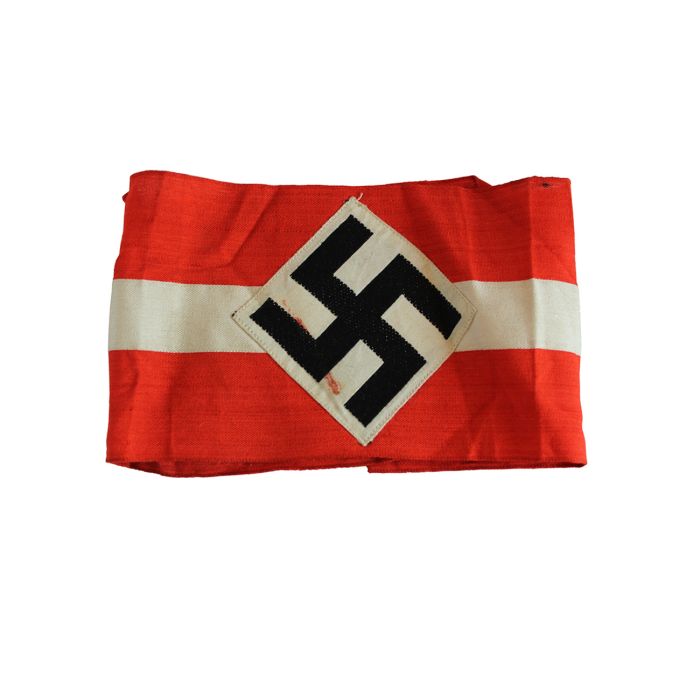 This Hitler youth arm band is red with a white center stripe and has the sewn on HJ diamond with a woven swastika. It is 4 1/8 inch wide and 21 inches long.

The Hitlerjugend, (Hitler Youth) HJ for short started from the youth group called Grossdeutsche Jugendbewegung or Greater German Youth Movement. Renamed in July 1926 to the Hitler-Jugen, Bund Deutscher Arbeiterjugend or Hitler Youth, League of German Worker Youth. It was a boy’s youth organization for boys between 14 – 18 years of age. There were a large number of youth groups in Germany after WW1 ranging from political to religious. Hitler transitioned these groups from innocent youth movements, to political groups focusing on Hitler doctrine. It became a partial paramilitary organization and was officially an integral part of the SA.

Though members of the Hitler Youth were taught the Nazi ideology, including racism, they initially had activities similar to that of the Boys Scouts which including camping and hiking and academic studies. Over time though many activities became more military related such as weapons training, war tactics and physical training and fitness. Much of the training was designed to undermine the traditional values and structures of German society and the privileged. Preparing the Hitler Youth for joining the German Nazi army.

By December 1936, Hitler Youth membership had reached over five million. Membership then became mandatory and by 1940 there were eight million members. If parents refused to allow their boys to join, they were subjected to investigation.