Be the first to review this product
$199.00
In stock
SKU
DV111
Add to Wish List Add to Compare
M2 PARATROOPER HELMET - REPRODUCTION
Skip to the end of the images gallery 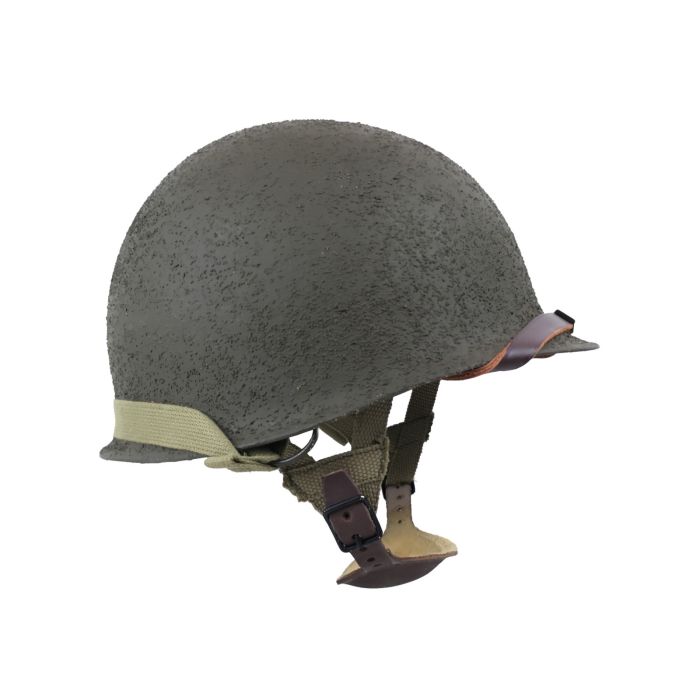 The M2 Helmet was used by American Paratroopers in WWII. This helmet comes with jump liner, net, chin cup and was also known as D-Bales typical of D-Day in Normandy.

This helmet has been beautifully restored and the attention to detail and accuracy that was used to make this helmet is top of the line. You couldn't get a better example. The Web is THBT OD#3 and comes with DOT fasteners. Also it comes with the neckband, sweatband, chin cup, OD#3 2/4 pattern net, and the M1 leather chin strap.

The liner is American WW2 style and the shell is post-war but it is the same as the US WWII shell with D-bales.

Worn by American soldiers in World War ll, this helmet was widely used by American Paratroopers. It is also commonly referred to as the M2 D-Bale Paratrooper Helmet, worn by many soldiers in Normandy on D-Day, and it is widely viewed as the most worn helmet during that time period. This lined helmet was worn by combat troops and parachute infantry men alike, but primarily issued to paratroopers. These helmets were fitted with liners, neckband, sweatband, chin cup and leather chin strap.

The rest of the US Army used the M-1 Helmet .The M-2 helmets had a modified wire for the chin strap that was D-shaped, leading some to refer to it as the D-bale‘. This modification was supposed to deter it from snapping off during a jump, but with as rare of a find as these M-2 helmets are, it may not have been a particularly helpful modification.