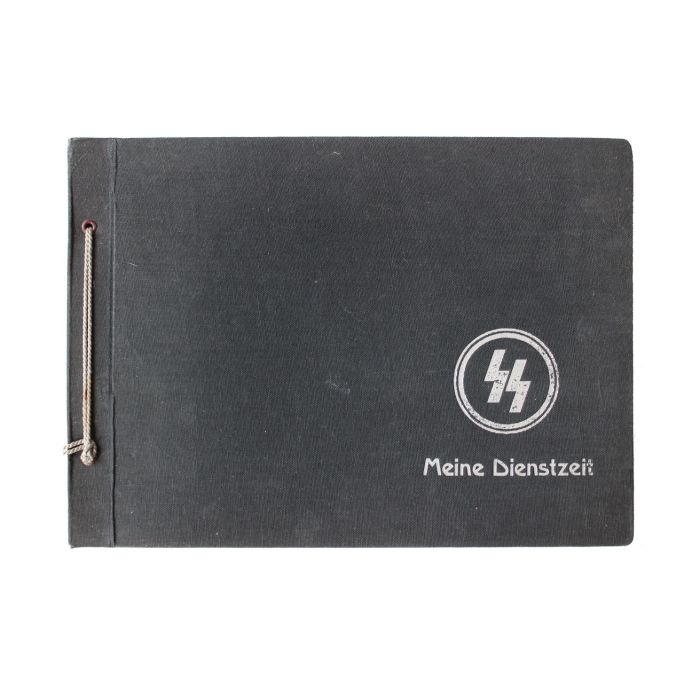 The photo album is 32 cm x 23 cm.  Images inside the album are between sizes:

(All photo sizing is approximate)

The album is in good condition. It has many pages but many do not have  photograhs.

The SS Germania regiment (German: SS-Standarte Germania) was formed as early as 1934, and the initiative of its creation came from SS-Hauptsturmführer Wilhelm Bittrich. Initially, the regiment consisted of SS members from Hamburg

The Nordic formation, originally organised as the Nordische Division (Nr. 5), was to be made up of Nordic volunteers mixed with German Waffen-SS personnel. The SS Infantry Regiment Germania of the SS-Verfügungs-Division, which was formed mostly from Germans, was transferred to help form the nucleus of a new division in late 1940. In December 1940, the new SS motorised formation was to be designated as SS-Division Germania, but after its formative period, the name was changed, to SS Division Wiking in January 1941. The division was formed around three motorised infantry regiments: Germania, Westland, and Nordland; with the addition of an artillery regiment. Command of the newly formed division was given to Felix Steiner, the former commander of the Verfügungstruppe SS Regiment Deutschland.