Be the first to review this product
$295.00
In stock
SKU
P-007
Add to Wish List Add to Compare
Email
BRINGING THE PEACEMAKER HOME PRINT BY ROBERT TAYLOR - PRINT
Skip to the end of the images gallery 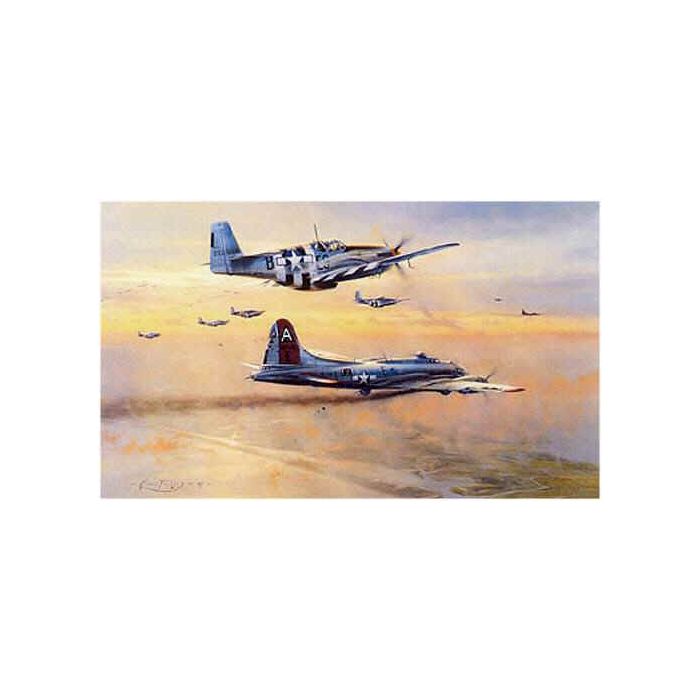 By 1944 the USAAF were dispatching bombers deep into Germany on a grand scale. In June alone no fewer than 28,800 aircraft were dispatched into hostile air space, the scale of operations such that enabled hitting a dozen or more different targets on a single day.

Even with the benefit of long-range fighter escort, the bomber formations had to run the gauntlet of the Luftwaffe's fighter defenses as they approached and departed the target area. With plenty of practice during the previous 12 months, the German fighter pilots had developed highly successful techniques of attack against the American four-engined bombers, and whenever they engaged in numbers, USAAF losses were heavy - 37 bombers failed to return from raids against synthetic oil plants and aircraft factories at Leipzig on June 29.

On July 20 it was the turn of the 91st Bomb Group to attack an airfield near Leipzig, suspected of harboring the new menace - the Luftwaffe's revolutionary Messerschmitt Me262 jet. As the formation spread out for the bomb run, the 401st squadron took the low position - the most vulnerable to fighter attack.

Just as the crew of The Peacemaker steadied the ship to sight the target, the squadron was set upon by Focke-Wulf 190s. The formation leader was set on fire wingtip to wingtip, almost colliding with Peacemaker as the stricken aircraft slid into the void below. At that moment, cannon shells ripped into Peacemaker as a Fw19O flashed past within 200 feet, its guns blazing. Hit in the wing and tail, the bucking B-17 began to slip below the rest of the formation. She was a long way from home.

Robert Taylor's dramatic portrayal of events picks up the story as the injured bird limps towards the sanctuary of the English coast. That she has got this far is a miracle, due in no small part to the close attentions of escorting P-5 IB Mustangs of the 361st Fighter Group.

To keep her flying, the crew are jettisoning everything that can be safely bundled out of the aircraft. The front hatch is open and bombardier Marion Havelaar has reluctantly dispatched his 201b bomb sight to the ocean below - for him, an act of total sacrilege. The Peacemaker made it back to Bassingbourne that day; eight others did not.