Liberation of Belgium and the Netherlands

The Netherlands fell to the Germans in May 1940 and was not re-entered by Allied forces until September 1944. 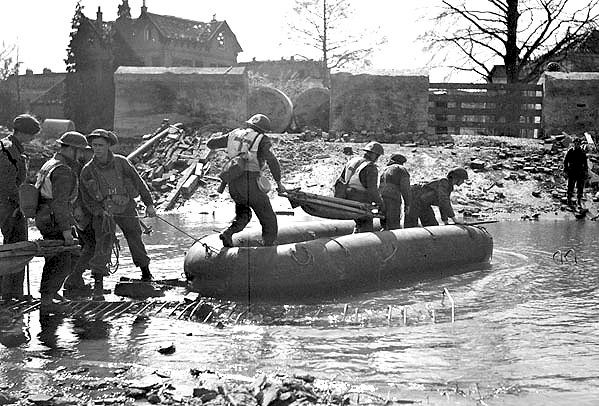 In the 3 months following their landings in Normandy the Allied armies had defeated the German Army in France, liberated Brussels, captured Antwerp and, an in the east reached a line running southwards along the Moselle through the Vosges to Swiss frontier .

On 17th September, with the object of outflanking the Siegfried Line, two American airborne divisions were dropped in the Nijmegen area and one British at Arnhem to clear the path for British Second Army.  Speedy defensive concentration and bad weather prevented full success; the crossings of the rivers Maas and Waal were secured but that of the lower Rhine at Arnhem had to be abandoned after an epic stand by the British 1st Airborne Division assisted by the Dutch Resistance.

By late September the Allied advance had outrun the logistic capacity to support it. The channel ports, except for Dunkirk, were in Allied hands but unusable until bombing damage had been repaired, and the lines of supply and reinforcement ran back to Normandy.  Antwerp, with the help of the Belgian Resistance captured intact, was unusable so long as both shores of the Scheldt estuary remained in German hands. 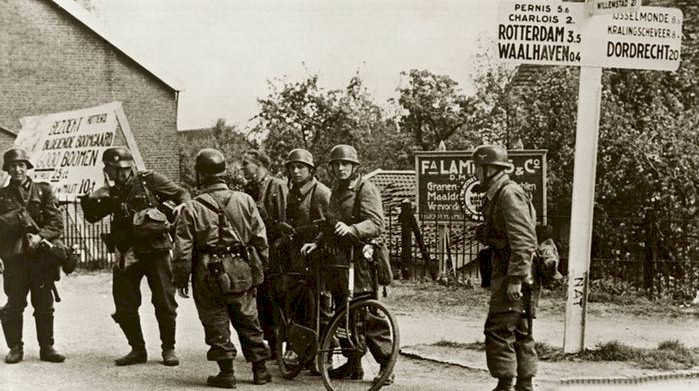 The south shore was finally cleared by Canadian 1 Corps on 2nd November after a month of hard fighting.  The clearance of the north shore and Walcheren Island, completed on November 8, involved some bitterly contested combined operations by British and Canadian troops.  The mined approaches to Antwerp were swept and the port quickly restored.  The shortened supply lines gained marked a turning point in the campaign.

By early December, as a result of the Allied November offensive, British Second and Canadian First Armies lay along the Maas and Waal, American Ninth had reached the Roer, American Third was pushing forward into the Saar and French First Army had reached the Rhine at Mulhouse.

On the 16h of December the Germans launched their last counter offensive of the war against the lightly held Ardennes sector. Its object was to recapture Brussels and Antwerp thus cutting the Allies’ supply lines.  The advance, 50 miles at its maximum, was halted on Christmas Eve.  On January 3rd the Americans, with some British reinforcement, struck back and within 4 days the Germans were withdrawing.  Meanwhile British Second Army eliminated the bridgehead west of the Roer and the Americans and French dealt similarly with the salient south of Strasbourg.

The last main battle of the campaign began on 8th February with an attack by Canadian First and British Second Armies from the Nijmegen bridgehead south-east through the Siegfried Line and they Reichswald into Germany itself.  On the 17th, American Ninth Army attacked north-eastward and, after intense fighting, the armies made contact on March 3rd in Geldern.  To the south, by March 9, American First and Third Armies had secured bridgeheads at Mannhein and Oppenheim. 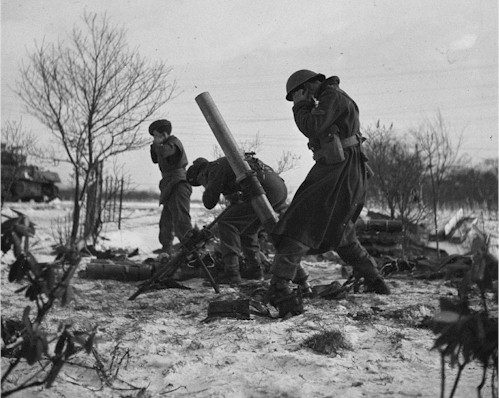 Proceeded by intensive air and artillery bombardments the passage of the Rhine was successfully accomplished by British and Canadians on the evening of March 23. By the following evening the bridge had been expanded to link up with the British 6th and American 17th Airborne Divisions dropped that morning to the north of Wesel.  Further crossings in strength followed and by April 3rd the British and Canadians had taken Osnabruck and were approaching Minden, American First and Ninth Armies had encircled the Ruhr, trapping large German forces, and in the south French First and American Seventh had crossed the Rhine.  This battle marked the end of co-ordinated German defence although improvised battle groups continued to resist until late April.

First contact with the westward advancing Russians was made on April 25th.  By the time Canadian First Army had reached the North Sea Coast and contained the large German force cut off in west Holland, British 2nd Army, with a corps in Denmark and another in Schleswig-Holstein, was on the Elbe from its mouth to Wittenberge, southward of which American First and Ninth Armies lay along that river.  Further south French First and American Seventh Armies were in Austria and American Third had entered Czechoslovakia.  Final German capitulation came on May 8th after five years and eight months of war Europe was again at peace. 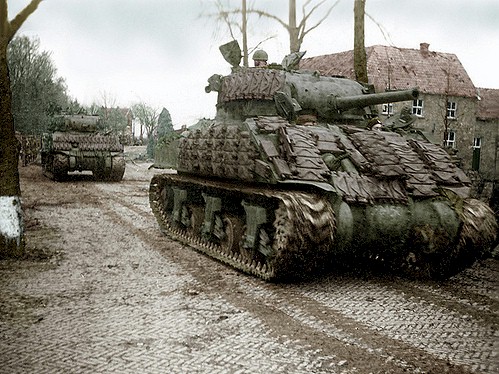 The Commonwealth servicemen who died in the campaign are mostly buried in war cemeteries, and Commonwealth sections of other cemeteries along the line of advance. Allied command of the air played a large part in the success of the campaign and many of the airmen who died during operations over Europe are buried singly or in small groups in village cemeteries and churchyards where their graves are tended with loving care by the local communities.  The 1062 soldiers whose graves are unknown are commemorated on the memorial in Groesbeek Canadian War Cemetery and the missing sailors and airmen on memorials at their home ports or at Runnymede, England.

The village of Mook was entered by parachutists of the 82nd U.S. Airborne Division on September 17, 1944; fighting continued in and around the village for four or five days until British armored troops completed its liberation.

The men buried in the Mook War Cemetary died for the most part either during the fighting in the vicinity in September and October 1944, or at the time of the advance into Germany in February 1945; a few were casualties during the intervening period of artillery and patrol activity.

The Mook War Cemetery is the final resting place of 322 soldiers killed, of these 15 are unidentified. Also commemorated here are 11 Foreign National casualties

The Commonwealth War Graves Commission is responsible for the cemetery. It features a Cross of Sacrifice at the cemetery entrance made of Portland stone, with a metal sword. A register and a guest book are present.

The 322 burials are from the following countries:

Allied forces entered the Netherlands on 12 September 1944. Airborne operations later that month established a bridgehead at Nijmegen and in the following months, coastal areas and ports were cleared and secured, but it was not until the German initiated offensive in the Ardennes had been repulsed that the drive into Germany could begin. 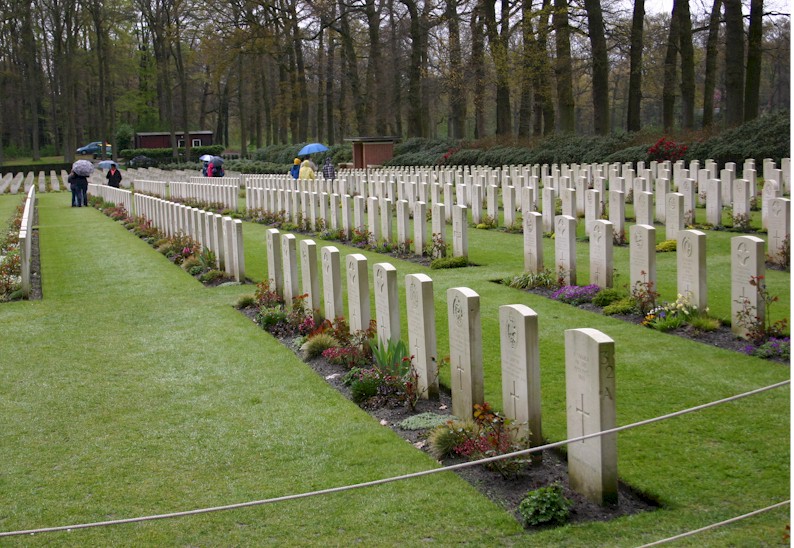 Most of those buried in The GROESBEEK CANADIAN WAR CEMETERY were Canadians, many of whom died in the Battle of the Rhineland, when the 2nd and 3rd Canadian Infantry Divisions and the 4th Canadian Armored Division took part in the drive southwards from Nijmegen to clear the territory between the Maas and the Rhine in February and March 1945. Others buried here died earlier or later in the southern part of the Netherlands and in the Rhineland.

This cemetery contains 2,610 Commonwealth burials of which 2,338 were Canadian soldiers. There are also nine war graves of other nationalities.

The cemetery is unique in that many of the dead were brought here from nearby Germany. It is one of the few cases where bodies were moved across international frontiers. It is believed that all fallen Canadian soldiers of the Rhineland battles, who were buried in German battlefields, were reinterred here (except for one who is buried in Reichswald Forest War Cemetery). General H.D.G. Crerar, who commanded Canadian land forces in Europe, ordered that Canadian dead were not to be buried in German soil.

Thousands of Dutch children tend the graves of the soldiers buried here as they do throughout the Netherlands.

The cemetery also has a Cross of Sacrifice within it.

Within the cemetery stands the GROESBEEK MEMORIAL, which commemorates by name more than 1,000 members of the Commonwealth land forces who died during the campaign in north-west Europe between the time of crossing the Seine at the end of August 1944 and the end of the war in Europe, and whose graves are not known.

The great majority of those buried in Holten Canadian War Cemetery died during the last stages of the war in Holland, during the advance of the Canadian 2nd Corps into northern Germany, and across the Ems in April and the first days of May 1945. After the end of hostilities their remains were brought together into this cemetery. 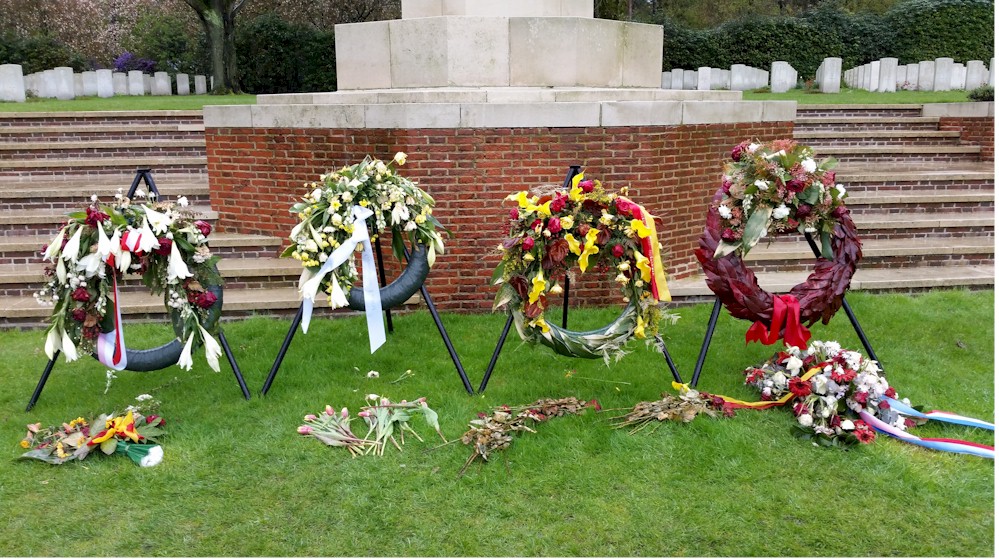 Holten Canadian War Cemetery contains 1,394 Commonwealth burials. One thousand three hundred and fifty five of those were Canadian who gave their lives during the last phases of the war in the Netherlands and during the campaign of the Canadian Second Corps in Germany. The remaining are:  36 British, 2 Australian and 1 Belgian which are broken down to:  Navy 2, Army 1,378 and Air Force 14.