Be the first to review this product
$79.00
In stock
SKU
P-99
Add to Wish List Add to Compare 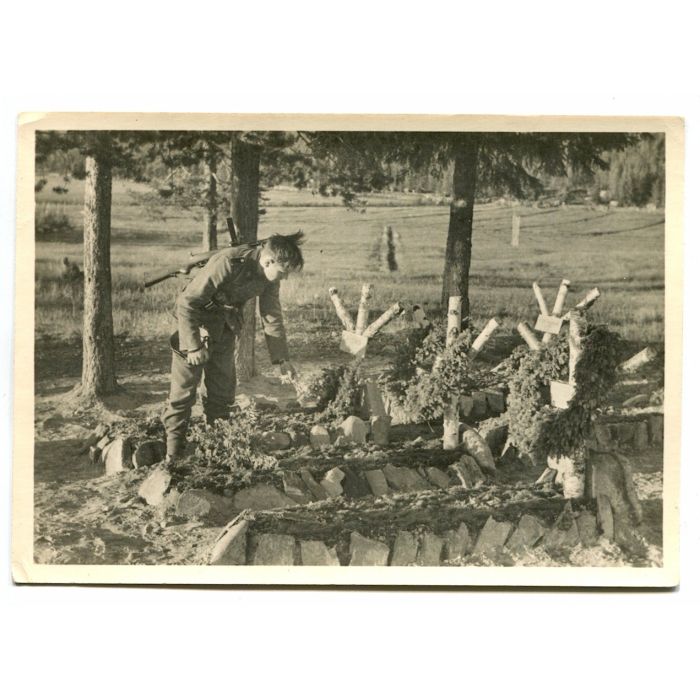 KAMPF DER SS GEBIRGSDIVISION "NORD "IN KARELIEN The Battle of the SS Mountain Division "Nord" in Karelia postcard series is similar to the "Our Waffen SS" postcard series and was also issued by permission of the SS Fuhrungshauptamt (the SS Main Office for Guidance, led by Heinrich Himmler). We believe that the SS Gebirgsdivision `Nord `series consists of 35 different postcards. A wrapper or sleeve for this set is not known to the authors.

All are printed by the Kunstverlag E. A. Schwerdtfeger & Co AG., Berlin.

This information is printed on the reverse of the postcards with a vertical text in the center, dividing the card into two sections. The text at the top left says `SS- Gebirgsdivision `Nord`in Karelien "(2 lines). All postcards are printed on a good quality cream base photographic stock with letter press printing on the reverse in black.

The SS - Gebirgsdivision "Nord "series, only one font type. It corresponds to Font I of the Unsere Waffen SS series, which is a Times style font with serifs. I have not found any difference in the printing styles (font types, text variations, etc.), and I therefore assume that this postcard series was issued only once.

In support of this theory, postcards from this series are significantly harder to find than the Unsere Waffen SS series. While it is possible that there were multiple printings, the consistency evidenced in the cards makes it likely that multiple printings would have been done at the same printer, and in smaller runs.

While I have not found any documentation regarding the date of issue of this series, we have narrowed it down to between June 1942 and October 1943. This is based on changing name of the division over time. The division was renamed in September 1942 from SS - Division "Nord "to SS - Gebirgsdivision "Nord", it was renamed again in October 1943 to 6. SS-Gebirgsdivision "Nord". One of the postcards shows Generalberst Dietl from the German Wehrmacht (Army) together with SS Gruppenfuhrer and General of the Waffen SS Matthias Kleinheisterkamp; Matthias Kleinheisterkamp had the command over SS