AMERICAN MEDAL OF HONOR WW11 - ARMY Can not ship to U.S.

Be the first to review this product
$74.95
In stock
SKU
M453JO
Add to Wish List Add to Compare
REPRODUCTION of theWorld War Two US Congressional medal of honor army
Skip to the end of the images gallery 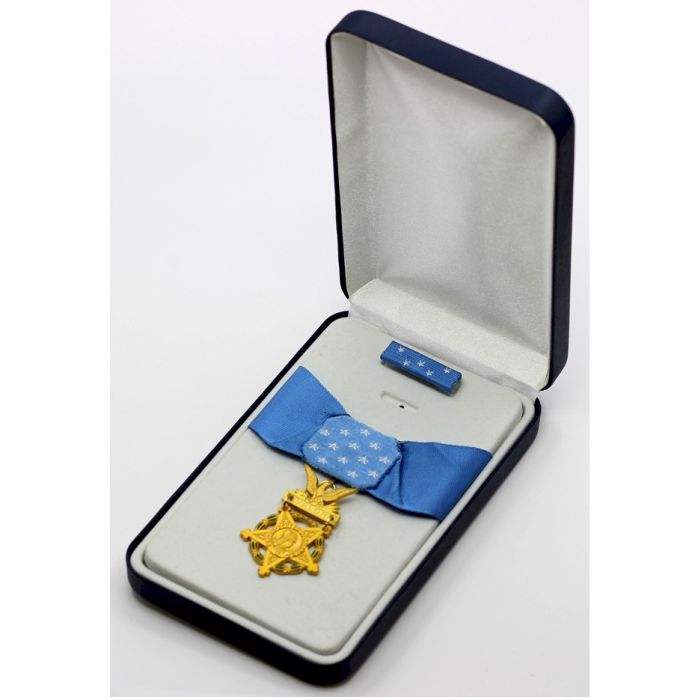 The medal, the blue ribbon and ribbon bar along with a display case.

This medal is the highest Military Award given in the United States.  The Medal of Honor is awarded for personal acts of valor above and beyond the call of duty and is issued to Military personnel only.

This Medal is the Army Medal of Honor and is one of the only 3 versions of the medal.

First created in 1861 during the Civil War in recognition of the men who distinguished themselves during battle for "conspicuously by gallantry and intrepidity".

Since its inception there has been 3469 medals awarded and over half of them were issued during the Civil War.  Normally presented to the recipient by the President in a formal ceremony, it can be awarded posthumously to the primary next of kin.

As this medal is protected under U.S. law it is illegal to sell this item in the U.S.  Even if it is a reproduction we are unable to sell or ship this item to the United States.

We do not wish to disrespect in any way the recipients of these the most honored of medals; Medal of Honor and The Victoria Cross.  We not advocate the wearing of these medals but understand that for historical purposes the display of these items is worthwhile in museums, galleries or personal history collections.

Though the sale of the Medal of Honour is disallowed in the United States it is not illegal in other countries.   The sale or reproduction of the Victoria Cross, a comparable Allied medal, is not illegal anywhere in the world including the commonwealth.

Awarded for:  “Conspicuous gallantry and intrepidity at the risk of life above and beyond the call of duty”

Awarded for:   “most conspicuous bravery, or some daring or pre-eminent act of valour or self-sacrifice, or extreme devotion to duty in the presence of the enemy”