Be the first to review this product
$14.95
In stock
SKU
A-120
Add to Wish List Add to Compare
Email
AMERICAN M1 ARMY AND MARINE CORPS MESS KIT - REPRODUCTION
Skip to the end of the images gallery 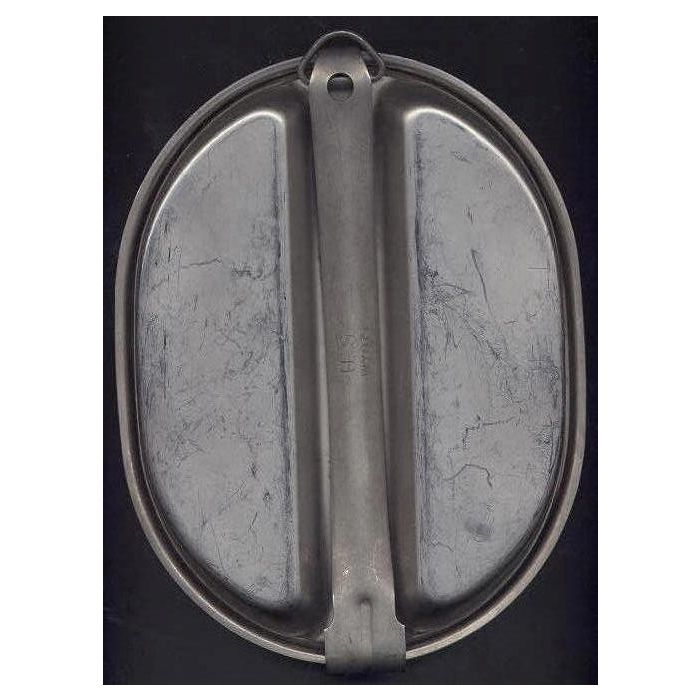 We have a large quantity of these, so please note that mess kits will vary from the one shown in pictures, all are in fantastic condition. In the years prior to World War II, two factors influenced the design of the U.S. Army's M-1926, M-1932, and M-1942 mess kits. First, unlike most other armies of the day, the U.S. mess kit was designed to serve men queuing in feeding lines and served in unit formations from large garrison-type field kitchens when not in actual daily combat operations. Secondly, U.S. soldiers in the field were never expected to either forage or to completely cook their rations, even in daily combat or frontline service. Instead, when not used as a serving tray for company-size or larger units, the mess kit was used to re-heat pre-measured servings of the canned Reserve Ration. After 1938, it was used for the new C-ration, a canned combat ration with several menu precooked or dried food items.

The U.S. Army's flat ovoid M-1932 wartime-issue mess kit was made of galvanized steel (stainless steel in the later M-1942), and was a divided pan-and-body system. When opened, the mess kit consisted of two halves: the deeper half forms a shallow, flat-bottom, ovoid Meat Can Body, designed to receive the Meat Ration, the meat portion of the prewar canned Reserve Ration. The Meat Can Body, with its folding handle extended, can double as a crude skillet. The Mess Kit Plate (lid) is even more shallow, and is pressed to form two compartments, with a center divide wide enough to accommodate the folding handle. The plate also has a very secure ring that is held in place by friction.