Be the first to review this product
$299.00
Out of stock
SKU
O803
Notify me when this product is in stock
Add to Wish List Add to Compare
Email 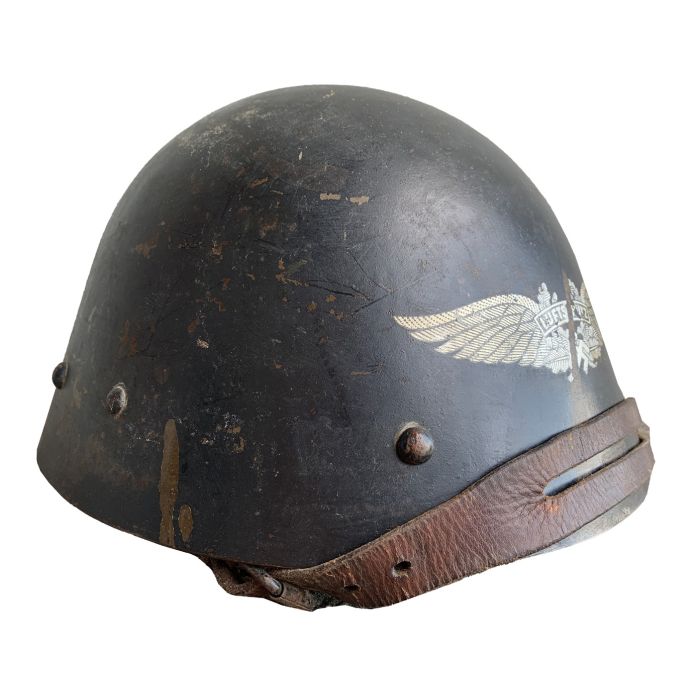 The M32 or Vz.32 helmet (Czech: Přilba vz. 32) also known as M32/34 is a military steel combat helmet used by Czechoslovakia from its adoption in 1932 to its annexation by Nazi Germany in 1939. The helmet also being used by the Slovak Republic and Finland among other countries that the helmet would be worn by.

This helmet's uniquely designed Egg Shell Shape makes it a favorite among collectors who like to show a variety of WW2 helmet designs. This particular example was repurposed during the war for use by Germany's Luftschutz or Civil Air Defense Service dedicated to protecting civilian populations from Allied bombing and air raids. These men and women of the Wehrmacht did indeed fight using these helmets and manned many an anti-air craft battery in defense of their home cities.

Background: Formed in late 1932 the Deutsches Luftschutzverband, (German Air Protection League), was a voluntary organization designed to provide civil air raid protection in large civilian centers. Shortly after Hitler ascension to power the Deutsches Luftschutzverband was restructured and placed under the supervision of the Reichsluftfahrtministerium, (National Air Ministry), under the control of Hermann Göring. On April 29TH 1933 the Deutsches Luftschutzverband was renamed RLB, Reichs Luftschutz Bund, (National Air Raid Protection League) and was given status as an official national organization tasked with all aspects of civil air raid defence. The RLB remained a voluntary organization with a small cadre of paid, full-time uniformed officials to oversee the organizations functions until June 1935 when obligatory service was introduced. Only the most basic uniform and equipment items were supplied to the cadre personnel, with the rest having to be bought personally by members. On September 26TH 1938 a specific helmet for RLB personnel was introduced that incorporated a raised horizontal "bead" between the visors and crown. These helmets commonly called the "Gladiator" style were supplemented with M35, M40 and M42 helmets that also incorporated a raised horizontal "bead" between the visors and crown. The Luftschutz also utilized a variety of captured helmets just like this one captured from the Czech army and repurposed for the German war effort.

Every original German helmet produced from 1935 to 45 had two factory stampings punched into the side and rear or both in the rear.  The alpha numeric number refers to the factory location and the inside metric circumference in centimeters.  The rear lot number refers to the production run and was used as a quality control measure. The font styles used at each factory were slightly different but highly consistent throughout the war and so fakes or reproductions will either not have these numbers at all or they will use the wrong font style or letter spacing and so are easily identified as post war made.