Be the first to review this product
$34.95
In stock
SKU
S656
Add to Wish List Add to Compare
Email 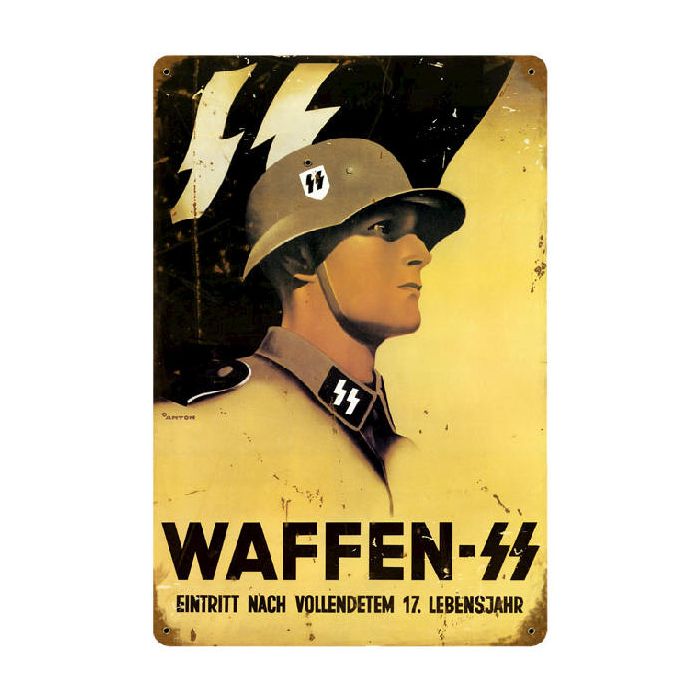 Designed and made using 24 gauge steel and a process known as sublimation, where the image is baked into a powder coating for a durable and long lasting finish. This sign comes pre-drilled and riveted for easy hanging.

The most famous and certainly one of the most striking recruitment posters of Nazi Germany was created by Ottomar Carl Joseph Anton.  Born on December 1895, in Hamburg, he graduated at the local 'Realgymnasium' in 1913 before entering the State School of Applied Arts in Hamburg.  Later, he fine tuned his arts training with his work at the poster printing company Arno Kypke in Haburg, where he became head of design.

In 1921 he went freelance as a graphic designer and started travelling to Scandinavia, southern Europe and Northern Africa.  Anton became a pioneer of modernist graphic design, producing travel and other advertisements that in style and execution was far ahead of its time.

In 1933 he joined the NSDAP and shortly afterwards was called to lecture at the Nordic Art School in Bremen.  Now Professor Anton, he continued to teach there until the end of the war.  In 1936 he became a member of the SS and from that point designed several propaganda posters for the SS and the Waffen-SS while other commissions came from the Ministry of Enlightenment and Propaganda and from the Reichs Postal Service, which commissioned him to design the final stamp series for the Heldengendenktag (Heroes Memorial Day) of 1944.

This Waffen-SS recruitment poster was designed in 1941 and features a portrait of SS-Unterscharfuhrer Klemens Behler who would end the war with the rank of Obersturmfuhrer and in command of SS-Artillerie-Regiment 54.  Behler was decorated with the Knight's Cross of the Iron Cross in May, 1945.