Be the first to review this product
$295.00
In stock
SKU
O697
Add to Wish List Add to Compare
Email 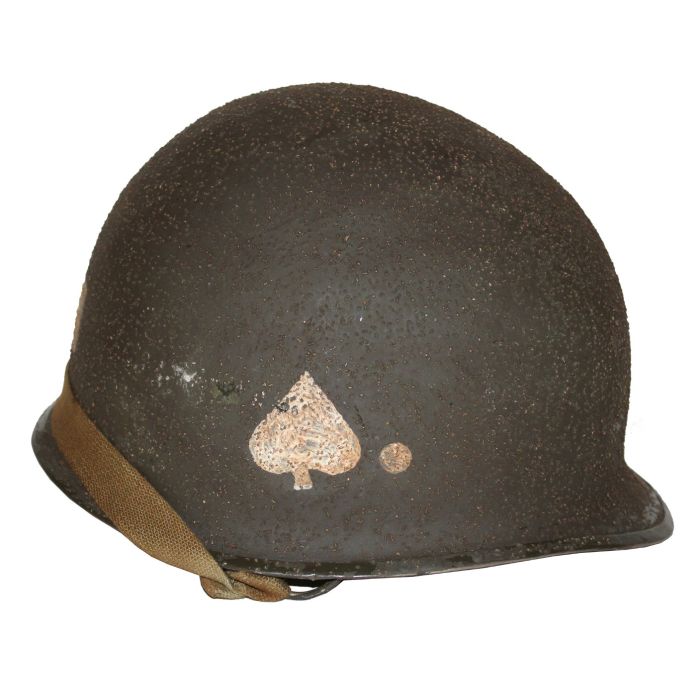 WW2 101st Airborne Division 506 PIR M-2 Helmet with D Bales has been hand painted with the 506th Ace of Spades and NCO (non-commissioned officer) bar along with the four dots of the 3rd Battalion.

The M2 was worn by American soldiers in World War ll, this helmet was widely used by American Paratroopers. It is also commonly referred to as the M2 D-Bale Paratrooper Helmet, worn by many soldiers in Normandy on D-Day, This helmet was worn by combat troops and parachute infantrymen a like but primarily issued to paratroopers. These helmets were fitted with liners, neckband, sweatband, chin cup and leather chin strap.

The rest of the US Army used the M-1 Helmet.

Helmet markings for the U.S. Paratroopers:

The legend began in World War II, when the 101st Airborne Division created tactical helmet insignias to help reassemble the paratroopers on the ground using playing card symbols.  The symbols were readily visible on helmets which was expected to help facilitate quick re-assembly.  The Ace of Spades was not only used to represent good luck, due to its fortunate connotations in card playing, but was considered a death card for the enemy.

Tick marks on helmets at the 12, 3, 6 and 9 o'clock postions, indicated regiment units as follows:

Also, small units within the 101st had their own esoteric helmet symbols. All divisional artillery units had a white circle, representing a cannonball, in the following order:

The 463rd PFA Battalion, attached just prior to the Battle of the Bulge, wore two parallel tics below the circle at 6 o'clock. The 326th Medical Company wore a white Geneva Cross. The 81st Airborne Anti-Aircraft and Anti-Tank Artillery Battalion wore a white triangle, The Division Recon platoon wore a white "R" and the divisional band wore a white lyre.

We only have 2 of these refurbished US original helmet shells .

So next august hope to have 6 more to bring home in my luggage..