Be the first to review this product
$495.00
In stock
SKU
O804
Add to Wish List Add to Compare
Email 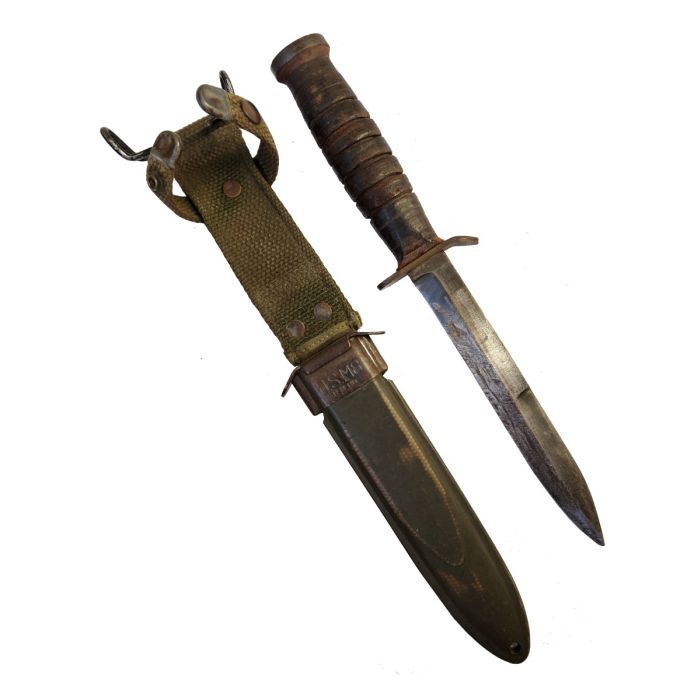 This is a WWII M3 U.S. fighting knife, made by the desirable maker, Utica International.

It comes complete in the correct M8 scabbard, maker marked B.M. Co . (Beckwith Manufacturing Co.) which was updated during the war to the M8A1 standard. These fighting knives were preferred by American infantry during World War Two for hand-to-hand combat.

The handle and stacked leather grip are in very good, used condition, with no major issues or cracking. There is a bit of wear near the pommel on one side, and it looks like it may have been treated to prevent rot. The cross guard is still in the correct shape, straight with a forward bend at the top for the thumb, though it is a bit loose due to the leather shrinking. The bottom of the pommel shows the U.S. "Flaming Bomb" ordnance proof mark and correct peened over tang.

The original scabbard is marked, U.S. M8 / B.M. CO and is in good condition, though it was entirely painted over with OD green paint except for the canvas frog. This is the earlier pattern of the scabbard, without the retaining loop, though it was later updated to have one. These feature a thermoplastic impregnated cotton fabric body, metal throat, and canvas frog and securing strap. The scabbard was manufactured by Beckwith Mfg Co. a division of Victory Plastics. The frog is in good shape, with the usual wear, and the retaining strap and snap are functional.

A very nice example of an early issue blade marked M3 knife from a desirable maker, complete with the correct scabbard. Ready to add to your WWII edged weapon collection!

History of the M3 Fighting Knife
The M3 fighting knife or M3 trench knife was an American military combat knife first issued in March 1943. The M3 was originally designated for issue to soldiers not otherwise equipped with a bayonet. However, it was particularly designed for use by elite or 'shock' forces in need of a close-combat knife such as airborne troops and Army Rangers, and these units received priority for the M3 at the start of production. As more M3 knives became available in 1943 and 1944, the knife was issued to other soldiers such as Army Air Corps crewmen and soldiers not otherwise equipped with a bayonet, including soldiers issued the M1 Carbine or submachine gun.

The M3 was developed as a replacement for the World War I-era U.S. Mark I trench knife, primarily to conserve strategic metal resources. The prototype for what would become the M3 was evaluated in December 1942 by the civilian board of directors of the Smaller War Plants Corporation Board (SWPC) against another competing design, the US Marine Corps' 1219C2 fighting utility knife. However, while the specified priority steel supplies for both knives were available, the M3's lower production cost compared to that of the 1219C2 convinced the SWPC board of directors to approve the M3 prototype for quantity production.

Though the M3 had competed with the USMC 1219C2 for approval by the Army, the M3, unlike the Marine Corps knife, was not a dual-purpose weapon designed for both close combat (fighting knife) and general use (utility knife). As the U.S. Catalog of Standard Ordnance Items of 1943 clearly explained:

The Trench Knife M3 has been developed to fill the need in modern warfare for hand-to-hand fighting. While designated for issue to soldiers not armed with the bayonet, it was especially designed for such shock units as parachute troops and rangers.

The M3 was first issued to U.S. Army soldiers in March 1943, with the first knives going to elite units such as airborne troops and the U.S. Army Rangers. Despite ordnance descriptions of the knife as being designed for hand-to-hand warfare, the M3 did not receive universal praise as a close-quarters fighting knife upon issue to combat units. While the knife itself was generally well-made and balanced (some paratroopers and rangers mastered the art of using the M3 as a throwing knife), the long narrow dagger-like steel blade, designed to economize on priority steel requirements, was best used as a thrusting or stabbing weapon, and performed less well when used for slashing strokes. Reports of blade failures on M3s in service increased as soldiers began to use their trench knives for ordinary utility tasks such as opening ammo crates and food ration tins, a role for which the M3 had not been designed. Some soldiers also found the M3's cutting edge to be difficult to maintain in the field. As issued, the blade's secondary or false edge was intentionally sharpened and beveled for only a portion of its length, leaving an unsharpened spine on the top of the blade in an effort to stiffen the relatively narrow blade. This limited the usefulness of the M3 when employed for backhand slashing strokes.

The M3 replaced the OSS dagger in service in 1944.

After U.S. Army ordnance began developing a proprietary bayonet for use on the M1 carbine, it was realized that the new carbine bayonet, which already incorporated the M3 blade design and leather-wrap grip, could also replace the M3 in service in a secondary role as a fighting knife. The carbine bayonet, now designated the Bayonet, U.S. M4, was added to the Company Table of Organization in June 1944, and the M3 was declared to be a limited standard ordnance item, with supplies to be issued until exhausted. Nevertheless the final M3 production run did not take place until August 1944, by which time 2,590,247 M3 trench knives had been produced.

At termination of production in August 1944, the M3 trench knife had one of the shortest production and service records of any U.S. combat knife. However, the M3's blade design continued in U.S. military service in the form of the U.S. M4, M5, M6, and M7 bayonets.