Be the first to review this product
$159.00
In stock
SKU
G1143LR
Add to Wish List Add to Compare
Email 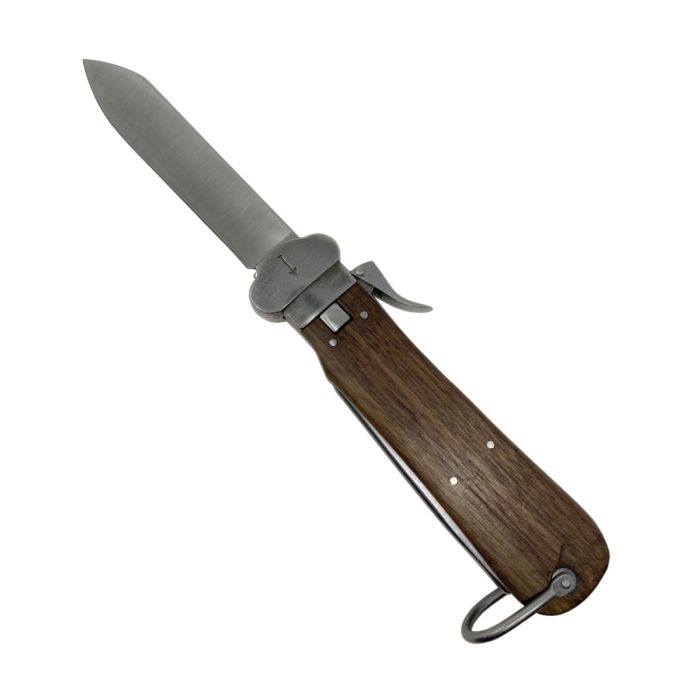 The German Paratrooper Gravity Knife "take-down model" was used by German Paratroopers during WWII to free themselves from tangled parachutes and thier cords. These knives were made in two versions this is the "take-down model" meaning that the knife can be disassembled, however there really is no need to do so. The blade is released by the trigger on the side of the handle and slides in and out using gravity.  These knives are not spring loaded, the side houses an awl for untangling knots. The butt end futures a swivel loop that is used to attach a lanyard. The handles are a nicely sanded walnut wood and they are RB numbered on the awl.

WE SHIP THESE TO THE U.S.A. ONLY

The measurements of the closed blade is 6 1/16 inches, Full Length blade open 10 inches. Most of them vary a little but only by 1 or 2mm.

The blades are sharpened.

Also most of these are not perfect and can have a nick or dent in the handle. When fully extended the blades can have a little play in them.

The Fallschirmjager gravity knife is one of the most recognizable gravity knives in the world War II-era Flieger-Kappmesser (Translated: Flyers-cutting knife), telescoping gravity-propelled locking blade. First produced in 1937, the often so called Fallschirmjägermesser was initially issued to German flight crews and paratroops, primarily for the purpose of cutting a trapped parachutist from his rigging in case he landed with a tangled parachute, or became entangled in trees or in the water with the shroud lines. The spike was used to untie knots while packing the parachutes. Luftwaffe air crew members used the knife to cut themselves out of their harnesses or cut through the aluminum hull of the aircraft after a crash landing.