Be the first to review this product
$175.00
Out of stock
SKU
O481
Add to Wish List Add to Compare 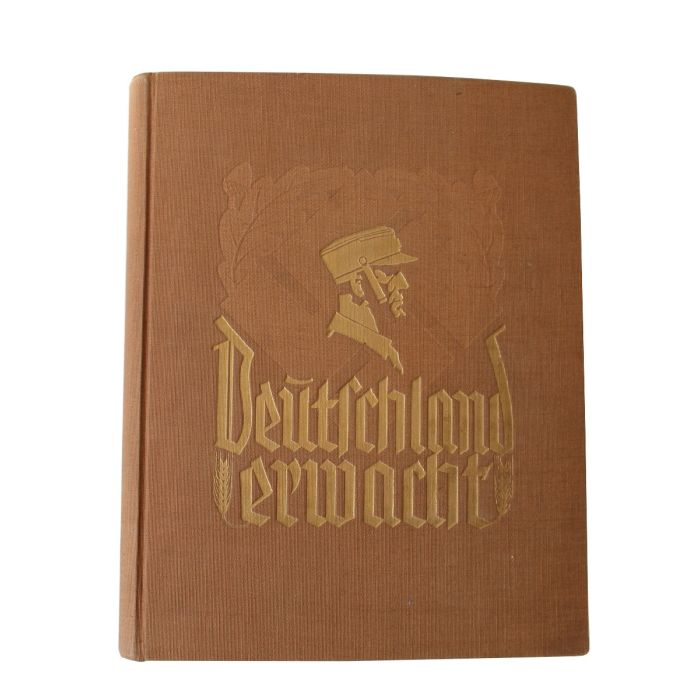 The WWII GERMAN CIGARETTE CARD ALBUM is a hardbound book with many outstanding photos of Hitler and other high-ranking Third Reich officials. Published by Cigaretten Bilderdienst Altona Bahrenfeld in `1933

At rear of the CIGARETTE CARD ALBUM is a six-folded captioned monochrome panorama plate measuring 1200 x 30 cm., featuring a Nazi mass-meeting at Luitpoldhain, on the occasion of the inauguration of Nazi standards and flags.

Light brown fabric cover, showing only faint age with no rips or tears and is embossed in gold with storm trooper’s head as well as the title “Deutschlang erwacht”.

This is the early version that still has pictures of ERNST ROHM before the “Night of the Long Knives” of 30 June, 1934, the later version has photograph of Victor Lutze as Chief of the SA, rather than that of ERNST ROHM

An excellent reference work for 3rd Reich studies. Has many early pictures from the Beer-Hall Putsch era, as well as later street-action and then party rally shots.

The book itself is in good condition. But it is missing 1 page. It looks to be ripped out right before page 9 . a picture of Adolph Hitler . not a cigarette card .

It comes with paper dust cover but it is damaged so did not show in the picture.

More Information
Reviews
Write Your Own Review
Only registered users can write reviews. Please Sign in or create an account
Customers Who Bought This Item Also Bought