HISTORY OF THE GERMAN COMBAT HARNESS OR Y-STRAP 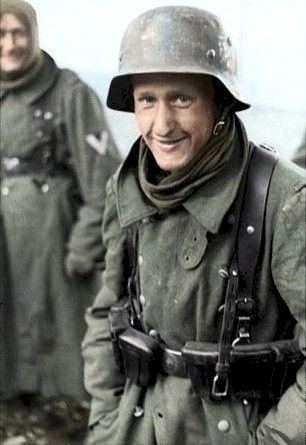 The German WWII combat harness, suspenders or Y-strap was an everyday standard piece of the German soldier’s equipment during the war to allow the soldier to carry a wide range of heavy gear. This allowed for a more equal distribution of weight onto the soldier’s shoulders so that they could carry more at one time. These straps or harnesses were made with a combination of leather, heavy duty canvas and metal hooks and rings.

Initially a suspender system was used by the German Soldier that he wore under his coat having hooks that came out from holes in their jackets. This strap system was not very practical especially in battle and a replacement was needed.  The Y-strap was first issued in 1939 and was widely used by the troops by 1941. 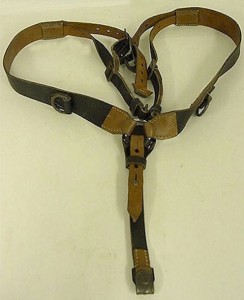 The Y-strap was made of 3 leather strapping pieces attached with a steel O-ring behind the shoulder blades. Two of the straps split into 2 sections for easier attachment to the uniform. One of the straps attached in the back of the soldier to his belt. The other two straps were in the front of the body and attached to the ammunition pouch D rings. If an ammo pouch is not worn then additional loops are needed to attach the Y-strap. There are two additional straps are fixed in the front and are to hook to a pack, rucksack or assault frame.

The leather of the Y-strap was black on the outside and brown on the inside and the straps were fully adjustable.

There are 3 types of Y-straps – Combat, Web and Lightweight.

The Combat and Web straps were issued to Heer and Waffen SS while the Lightweight straps were used by Cavalry troops and then the Lufwaffe but could also be used by all troops.

There were many design variations and improvements over time either as a way to improve the strap usage or just as a variance by manufacturer.  This also included a canvas tropical Y-strap.